Uranus in Aries and Post-Pisces Spiritual Identity: "Indigos and Crystals and Rainbows" Versus "The Regular Folks" 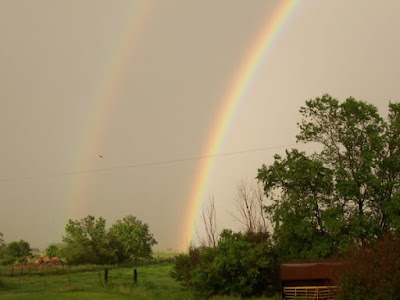 I had a post on this subject on my now-defunct willowsweb.net site, but I haven't published it here. This subject came up recently, and since Uranus is heading into Aries (identity) in just a couple hours, I'm thinking I'll put it out there.

The topic is the assigning of certain spiritual labels to people, especially to children.

I've noticed there are a lot of parents of a New Age persuasion who seem to want to create a paradigm where their children are this "Super-Human Spiritual Race" that has come here to save the planet. Whether the labels applied are crystal, indigo, rainbow, starseed, reincarnated Pleiadian royalty, or whatever - they seem to want to label kids, thereby putting some into the "spiritually special" camp and some into the "non-spiritually special camp."

I don't think it's ever a good idea to divide people into "spiritual" and "non-spiritual" - especially children. To me, people have inherent spirituality. But the New Age movement, especially, likes to set things up in a divisive, spiritually hierarchical way where some people are above others on their manufactured ladder rungs of enlightenment.

This feeds spiritual egos in some and keeps others insecure enough in their own spirituality that they'll swallow (and follow) anything those supposedly higher up on this ladder dish out.

In the same way that they clamour to put pseudo-enlightened gurus up on pedestals, they're now setting their children up there. I find this very creepy.

I mean, what ever happened to Aquarian egalitarianism? Really. Either you want to enter a real Aquarian paradigm where we're in the same boat, on the same planet, working together to solve our problems as equals, utilizing the strengths and skills of EVERYONE...or you want to stay in spiritual hierarchy. You can't have it both ways.

I understand that the souls newly on this planet are advanced - by necessity. We're in an extremely accelerated period of human evolution on this planet, and these kids are here for these times. Of course they're going to have to be quick on the uptake. They're going to have to grasp what's going on quite quickly and use all the tools available to them in the toolbox. And these times, built on the previous efforts of others, are supporting them in doing that.

One of the reasons I dislike this whole "Messiah Child Army" thing is that it's insulting to the members of lineages that have come before. People have worked their entire lives doing bone-wearying, alienating, dangerous work in circumstances that, in many ways, were much more difficult and heavy than today for those of a strong, conscious awareness. Those who have come before were often much less supported in the development and unfolding of their spirituality and spiritual work, and yet, they made remarkable progress. Without that progress, the climate would not exist where children could come to the planet already developed in these ways and able to use these spiritual tools right from the get-go.

Haven't parent's always placed big hopes in their children? Haven't they always delighted in how advanced and talented their kids are? I don't think today's parents have the market cornered on the belief that their children are special.

Living in a world in which people are aware enough to pick out a child's spiritual inclinations and influences right off the bat is a lovely thing - up to a point. But past that point, it doesn't serve anyone - not the parents, not the kids and not the society at large.

The terms "indigo" and "crystal" relate to the colours aura readers see around people when doing aura readings. Certain colours are associated with certain characteristics:

People considered to have a strong "indigo vibration" are associated with being "spiritual warriors." In basic terms, what this refers to is people who are system-busters, working to break down unjust and exclusionary dynamics, ideologies, systems, and hierarchies so that structures can be recreated in a form that works for everyone. These are people who were born not fitting in many ways, and they understand on a deep level that "the way things are" is unacceptable as long as it works for some and not for others.

The concept relates to going into systems and structures that are not working and trying to break problematic dynamics down while attempting to bring the problems within the situation to light. People who take on this type of stuff must be very sensitive and intuitive, trusting their own perceptions above all else, even when the people around them think they're crazy. They must have a strong will and an unshakable allegiance to themselves and to their inner guidance. They must have strong emotional empathy so that they can feel out complex problems and gauge danger. They go into extremely difficult (often dangerous) situations and do the energetic work that is there to be done. Often they're in situations where the powers-that-be are not too happy with what they’re doing, and they have intense powers of regeneration so they can process the negative energies they encounter and recover. In an extreme sense, they would rather die than continue as things are, and many have risked or lost their lives doing this work.

For another example: "crystal/crystalline/octarine" is related to setting and holding unconditional love, transparency, peace and harmony on the planet. Crystal is related to Piscean consciousness, including the understanding of the basic energetic connection of living things on this planet. This relates to telepathic communication, psychic abilities, the ability to move objects. But it's quite basic, really. Under the right circumstances, we all have these abilities.

Just interact with people and children as who they are as individuals. If they're sensitive, appreciate their sensitivity. If they have psychic or intuitive abilities, appreciate that. Don't try to stick a label on what they are or divide them into rigid categories.

Uranus is ingressing Aries now, and our raw and true personal identities are very important going forward. That definitely includes spiritual identity, but I truly hope this divisive spiritual labelling of children (or anyone) is part of what's going down the Piscean era drain...starting today.

We're human beings. (At least, I am.) No further labelling required.
Posted by Willow at 4:43 PM

No, no further labelling required,
Sabina,
Pluto in Leo

I agree! I once had a verbal altercation wish some crazed man about Pisces. He mentioned something about Pisces being... so super-stellar, higher-than-human, supreme things, and that his "education" in light, and god knows what else, supported it.

It's scary to think, but the guy had groupies last I saw him.

I told him that my sun's in Cardinal, and I felt no less or more special than anyone else.

To which he replied, "WELL, you must think you have the BEST sign."

No, d-bag. Your manipulative strategy is not gonna work on me.

I like Pisces, but I told him to dream on, get off the pipe, and/or get laid. Can't remember the order.

We are all on this planet, maybe not together but certainly not divided underneath it all, and we never know who the greatest movers and shakers of our world are gonna be.

I agree Deborah. I'm not into the zodiac signs as hierarchy, either, but a lot of people do that.

And under-developed/immature Pisces is some RANK stuff to deal with - coinciding with the New Age movement, in general, in my opinion.

I really think we're the ones we've been waiting for. We're all meant to be the movers and shakers of the astrological Aquarian Age. I think the days of figureheads are over. It's just too dangerous to allow one person to draw that much attention, you know? We have to be self-contained in a lot of ways, our own leaders. And a lot of what's going on has to happen subtly, on the down low.

Those who do rise as figureheads at this point are generally not the most potent or true. They're usually the ones who will promote a certain control-based agenda...all with big, old, pseudo-enlightened smiles on their faces.

I agree with you Willow, that Uranus in Aries will bring up issues dealing with all identity, including sexual orientation identity.

Starting yesterday, the US military will finally allow Gays to openly serve!

this seems to resonate with my Uranus in Aries poem:

All this indigo children stuff reminds me of Garrison Keillor's famous quote...

"Welcome to Lake Wobegon, where all the women are strong, all the men are good-looking, and all the children are above average."

old post, I know but this is very popular in my area.

I wonder if the parents who are convinced their kids are "indigo spiritual superheroes" are unconsciously reacting to the 1/99 phenomenon. ON some level they know if their kid isn't in the 1% or in the 10% trying to be the 1% then he or she is basically screwed when it comes to achieving the "American dream". So they convince themselves the kid is in the 1% of *something* and the rest of the world has yet to acknowledge it. in that regard I'm sympathetic to them even though i think they're way off base. they're actually scared witless their kid is going to end up a "loser" but can't understand why.

also, since everything creates its opposite . . . what about the "anti-indigo kids". you know, the black kids in the ghetto and stuff. cause all the "indigos" seem to be good looking white kids. (with an occasional Asian kid for, you know, "diversity" purposes)