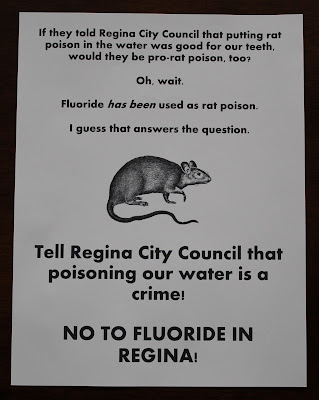 Here is the video on Odysee and Bitchute:

Bitchute: Fluoride/Fluorine Poisoning Through Water and Pharmaceuticals - Part One

April 1, 2022 Article: Jupiter in Pisces and Picking Up the Long, Long Historical Fight Against Fluoride Poisoning

Jupiter in Pisces and Picking Up the Long, Long Historical Fight Against Fluoride Poisoning 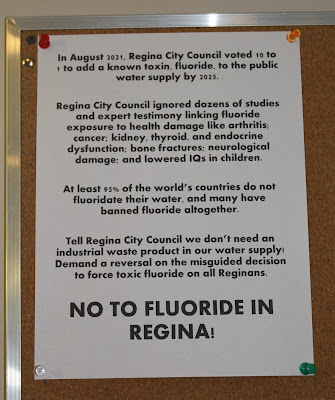 I put these posters up on the bulletin boards in my condo complex, and someone had taken them down in both buildings within three hours. A new record! I knew they would be coming down at some point, but three hours was impressive, even for the Censorship Brigade. Highly prone to hypocrisy, the Censorship Brigade left a poster hanging that was advertising a Christian church event that involved a politician as the keynote speaker. (Religion and politics all rolled into one poster!) I put the anti-fluoride posters up a second time, and pointed out this hypocrisy on the bottom of my poster.

Pisces is one of the signs of the zodiac associated with poisoning, especially poisoning that is invisible and dispersed or dissolved widely in water. The radioactive poisoning of the Pacific Ocean via Fukushima nuclear fallout is an example of this type of invisible, widely-dispersed poisoning of water. The poisoning of public water supplies via fluoridation is another example, and it's this example that I'm, unfortunately, working with intensively these days.

Just before I relocated to the city in which I'm currently living, Regina, Saskatchewan, the City Council here voted 10 to 1 in August 2021 to add fluoride to the city's water by 2025.

Near-simultaneously, the City Council in Calgary in the neighbouring province of Alberta, voted 13 to 2 in November 2021 to add fluoride to the water there.

Now, I find it impossible to believe that fluoridation of the cities' water supplies became such an important issue - just organically, spontaneously, and near-simultaneously coming up in both these cities - during a pandemic when there were many more pressing issues for these Councils to address.

Indeed, I smell outside, top-down influence here, as fluoridation of public water supplies is supported by the Alphabet Agencies and by those who are influential within those agencies. (The information shared at the link above appears to have been scrubbed by Soros' Open Society Foundations website.)

These sneaky and snaky votes on fluoridation - made by these City Councils while people were distracted, distressed, and traumatized by a pandemic as well as the criminal mandates - created a situation where it was impossible to bring together a cohesive opposition ahead of the votes. Ahead of these votes, people were being forcefully "socially distanced" and were being entrained to fear human contact of any kind. It also bears mentioning that these votes were snuck by, under the radar of most of the public, following decades of opposition to fluoridation in both cities. According to long-time residents here, Reginans have voted no on fluoride four times in the past.

That said, poisoning the water supply is a crime. Poisoning just one person is a crime, let alone thousands of people. It doesn't matter if local governments decide it's a good idea. It doesn't matter if a majority of the population has been deluded into believing it's a good idea. Poisoning the water and forcing people to ingest fluoride, daily and against their will, is wrong. It is a crime. Period. End of story.

We've known fluoride was toxic for decades now, and I had naively believed no Canadian government could be so misguided and deluded as to vote in fluoridation of public water.

Oh, how wrong I was.