There are more "unprecedented" and "once in a lifetime" storms on the way to the United States Gulf Coast. Two potential hurricanes, currently being called Tropical Storm Laura and Tropical Storm Marco, are scheduled to hit the same area of the Gulf back-to-back.

From August 21, 2020 - Once in a Lifetime: two hurricanes, same time, same place by Joe Mario Pedersen

The 2020 hurricane season has been one of the most active seasons on record.

Hurricane Katrina and Hurricane Harvey are tied as the costliest hurricanes on record, each causing about $125 billion in property damage.

Hurricane Katrina was blamed for 1,800 deaths, mostly in and around New Orleans, Louisiana, but intentional mismanagement of the (geo-engineered) situation by the administration of then-President George Bush, Jr. seems a more likely culprit. Bush signed a relief package and ordered military troops to the area on September 2, 2005, a full three days after the hurricane hit. It took even longer for supplies and aid to reach the people who needed it. Poor people without transportation out of the area were not evacuated and were left to languish without food, water, or shelter in sweltering heat. No provisions were made for the evacuation of disabled people. Horrifically, many were left to perish on the roofs of their homes. The Bush Administration's criminally negligent, in fact murderous, response to the emergency has been called a "national disgrace." We can be certain a much different response would have been produced if it had been members of the power elite languishing on those roofs.

We know the power establishment uses certain symbolic dates for the timing of its orchestrated events due to the date's dark occult power. It's come to my attention that August 24 is a Satanic holiday called St. Bartholomew's Day. This day is associated with a massacre of between 5,000 and 30,000 Protestants by Roman Catholics in France on August 23 and 24, 1572. It was believed that the massacre was instigated by Queen Catherine de Medici. In other words, as per usual, the people were tricked into slaughtering each other for the benefit of the so-called elite.

The despicable occultism used by the power establishment involves gaining power through the ritualistic sacrifice of innocent people and particularly mass deaths. Intentionally creating terror, trauma, mental and emotional anguish, and destruction are also prime avenues for increasing this type of perverted and psychopathic power.

And they're now attempting to take over anti-5G discourse. The idea is making the rounds in anti-5G circles that the Heroic Pussygrabber and Epstein Buddy is in the process of "repurposing" 5G towers and converting them to "healing Tesla frequencies," hooking people in with a pretty severe form of wishful thinking.

5G Towers Have Been Converted to 432HZ Tesla Healing Towers

Please filter the information you're willing to put in your brain, people.

The New Age teaches that mass deaths (being brought about intentionally by the power establishment) are nothing more than "Gaia cleansing herself of density and lower vibrations as the true believers ascend to the New Earth in the 5th dimension." This is how the New Age explains away mass murder committed by the state, and this is the way it will explain away the illnesses and deaths caused by 5G frequencies and the orchestrated pandemic.

With this ideology, "Gaia" is simply shaking the lower-vibrating humans off her pantleg, and once the process is complete, all (New Age) true believers will be safe in the blissful paradise of the 5th dimension. They use different terms for themselves: enlightened, awakened, evolved, visionaries, spiritual warriors, lightworkers.

New Age ideology produces complacency, passivity, brainwashing, groupthink, cliqueyness, and a refusal to think or act for oneself, especially if it contradicts the group. Adherence to New Age thinking produces a near-psychopathic detachment from other people (the lower-vibrators) along with zero sociopolitical awareness or responsibility. These people are taught that they can simply transcend the problems of Earth by "raising their vibrations" or "frequencies." There are no external individuals or entities to hold accountable under this ideology because, they are taught, people are "creating their own reality." As you might imagine, a fairly diabolical level of victim-blaming occurs, and criminal acts committed by the power establishment or other individuals are given a pass. Misuse of the term "karma" is common to simplistically explain why bad things happen.

I've been writing about the insidious influence of New Age since I started writing this blog in 2009. As I discovered when first studying the subject, much of astrology has been merged with New Age beliefs. You can see a collection of articles here:

New Age is false light, false truth, false prophets. It's a mind and spiritual control mechanism. Q Anon is a psychological operative and controlled opposition. Trump is just as much a part of the power establishment as any of them, even if he is in a rebelling arm of it.

A Saturn-Uranus Square Series in 2021: Applying the Earth-Based Values of the Embedded Resistance Amidst Structural Changes and Upheaval 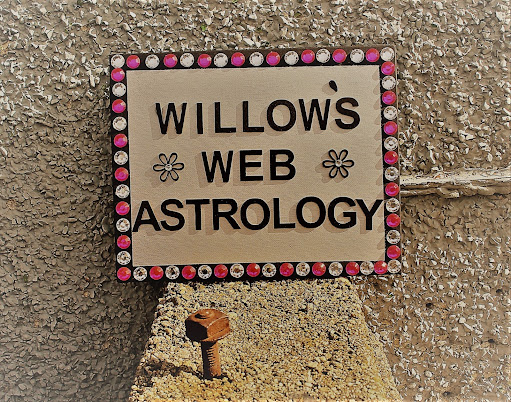 "A Saturn-Uranus Square Series in 2021: Applying the Earth-Based Values of the Embedded Resistance Amidst Structural Changes and Upheaval" is an article available to Willow's Web Astrology patrons. Click the button along the top of the page for details.

"Because we’re working this intricate dance throughout 2021, navigating this complex mix of Saturn with Uranus, our rebellion is embedded in many ways. It’s built right into the fabric of it all. It’s smooth as silk, leaving nothing to latch onto. It’s above reproach. They can’t put their fingers on it, on just how we’re managing to not fall in line, on how it is that we’ve come up with another choice, one they did not offer us.

Because we are connected to something pure, something real, something loving, something ancient, something true, we are sovereign and powerful beyond these silly authoritarian commands and constructs and protocols. They can’t take our freedom because they didn’t give us our freedom in the first place. It was in-born, and it is with us as long as we do not get fooled into giving it away.

In times such as these, going about your daily routines (Taurus) is a revolutionary act (Uranus). Simply living life as you’ve always lived, by your own values, is an act of rebellion."

Posted by Willow at 5:49 PM No comments: