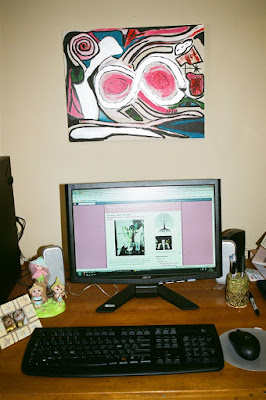 A couple of things of note going on right now...

Already slow-moving Pluto is grinding to a halt, stationing to go retrograde at 3 degrees Capricorn on April 4. That has some uncomfortable grinding, gear-changing energy for those of us sensitive to energetic shifts.

The same day - Saturday, April 4 - Mars in Pisces will oppose retrograding Saturn in Virgo. Saturn is the planet that rules Capricorn, so Saturn in Virgo in that opposition formation is influencing stationing Pluto in Capricorn. Potent, potent. The energies of the Mars-Saturn opposition as well as the energy of Pluto going retrograde are building until then, peaking April 4, but continuing all the following week.

It can be a little unbearable at times.

The day before, April 3, retrograding Venus in Aries squares stationing Pluto in Capricorn. More potentially uncomfortable energy. The energy of that square is carried into the next day and into the entire Pluto retrograde. Another check letting us know that our fresh starts (in relationships, with money, values and self-worth) have to work within some broader Plutonic context. Our fresh starts have to work with Pluto, not at cross-purposes. We have to understand now that the way things have been set up in the past is not how they are going to go in the future. Things have to change. At least for those of us who care to give humanity on this planet a fighting chance. Our new goals have to be set with this Plutonic imperative in mind.

See all these retrogrades (Venus, Saturn, Pluto)? Huge processes going on inside us. Recalibrating for leaps forward that we could not have even imagined previously. It's like backing up, giving ourselves room and taking a few settling deep breaths so that we can have the best running start possible.

The Mars - Saturn opposition can bring up feelings of being stretched way past our point of comfort. This aspect brings up, yet again, the energy of the ongoing Saturn - Uranus oppositions. So dealing with themes related to the dissolution of our old structures combined with flashes of consciousness about the way forward - completing the transition from astrological Piscean era to Aquarian.

After Mars moves out of opposition with Saturn, it heads to a conjunction with Uranus (April 15). Processing the energy of lightning strikes of blinding new consciousness (Uranus) through our bodies (Mars), again, is not necessarily comfortable.

So feelings of exhaustion, spaciness and being oddly energetically charged are par for the course. Feeling as if we just can't do it anymore because we really CAN'T do it anymore - not in the same old ways. We're being charged with the consciousness of the way forward at the same time as we're grinding to a halt within the old confines.

Plutonic symptoms are also to be expected as Pluto stations and is squared by retrograding Venus.

Plutonic symptoms relate to feelings of shedding and moulting of old energy. Like a snake shedding its skin. Passing this energy out of our bodies can cause things like nausea, absolute, bone-weary exhaustion and feeling kinda dirty and repulsive, even after showering/bathing. Sometimes it feels as if we have battery acid running through our systems, weird electrical impulses (also relates to the Uranus/Aquarius energy we've got going on now), feelings of radiating energy.

What we're purging in ourselves and in our relationships (for ourselves and for the collective) is not feeling too great at the moment.

So basically, some rough spots are to be expected. Do what is absolutely necessary but give yourselves lots of time to just sit and do "nothing." IE. process the huge amounts of energy coursing through our systems and deal with the physical and emotional demands of the day.

This Venus in Aries retrograde, in general, has been triggering my Pluto in Libra in small, annoying ways. Bringing people from the past into my consciousness whom I've had irritating experiences interacting with and digging up the emotions from those times. Most of it is related to my sense of injustice somehow.

But it all feels very much like the tail-end. The rawness of feeling is not there. It was processed at the time, and this retro feels like the final discharge of it. Letting it go and demanding more of my relationships (and the people in them) from now on.

The memory of being punched in the Plutonic gut stays with you, but I like the feeling that that stuff really is over now. I don't feel oppressed by past relationships anymore or as if there is a danger that I might fall into the same patterns. The knowledge that I really am in new territory (or will be soon) is refreshing. I don't want to speak too soon because we still have the Venus station on the 29th degree of Pisces which could have some nasty blind spots associated, but I do feel as if I will be able to handle anything that should come up. (And I'm actually hoping it's all done!)

The idea that we're discharging the last eight years of relationship/values/self-worth stuff (since Venus was last retrograde in Aries - March/April 2001) has been really helpful during this current retrograde. I really am seeing the progress and hope everyone reading this is, too!
Posted by Willow at 12:42 PM

I stumbled upon your blog accidentally about half a year ago and since then have been hooked. Thank you so much for writing with so much honesty and so little b** s***. Though I've thought about commenting a few times before this post really did get me here finally.

BOY am I feeling the energies of these days. And major influential things are changing in my life. It really does feel like a point of culmination is ahead of me and nothing will be the same again. The thing is, in my mind, all this was leaving a feeling of doom and gloom. And then today I read your post and your tone of optimism pulled me a few feet up from hell. I'm now pulling my blanket close up to me and resting and waiting for the storm to settle.

Thank you once again, and know that though there may not be comments, there are people (like me!) who have your blog bookmarked and check it every day :-)

PS: do you consult for others?

"Do what is absolutely necessary but give yourselves lots of time to just sit and do "nothing." IE. process the huge amounts of energy coursing through our systems and deal with the physical and emotional demands of the day."

actually, i recently arrived at this course of strategy, having begun to REALLY sense the weight/wait of the plutonic influences you reference so insightfully. the heftiness of the days i've been waking to got me to try and find another way of dealing. minute by minute, a deep breath at a time.