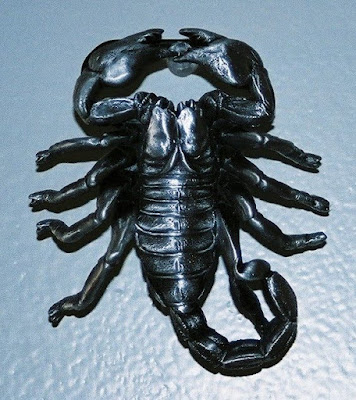 The Moon enters Scorpio this afternoon at 3:24 p.m. MST and we start into a series of big lunar aspects surrounding tomorrow's Saturn-Pluto square and preceding Monday's Scorpio New Moon. The detailed post on that is here. We're bringing a lot into the alchemical mix over the next 48 hours. Processing, processing.

There's nothing left to do as the Moon goes dark but to get still and listen carefully, intuitively, as we allow for emotional completion of this cycle. As we do that, there could be some intense emotions rising to the surface. Traumas and betrayals from the past that we need to emotionally revisit one last time before passing the related emotion through us and releasing it once and for all.

We're in a much different place now than we were then.

This is a very powerful Dark of the Moon in Scorpio, as well as New Moon, and we can let go of a lot here. The emotional rebirth at the New Moon can be complete. We're finally able to release some knots we've been working on untying for so long now related to complex, long-embedded issues.

We also experience the Sun in Scorpio trine to Uranus Rx in Pisces at 22 degrees of the signs around suppertime tonight (6:41 p.m.). In relation to the Saturn-Pluto square:

"There's a strong body intuition available here connected to broader spiritual guidance, and we can use that as a guide and a safe haven as the structures shift (or reinforce yet more of the same) and attempt to draw us into roles within them."

We've got a stellium in Scorpio at the moment - the Moon, Venus, Ceres, the Sun and Mercury.

For a backgrounder on Scorpio/Pluto energy, check this post: "The Slow March Out of Scorpio Has Begun..." It's from almost exactly this time last year - November 17, 2008.

Although, the current Scorpio energy has more of a "completing" feel to it to me...still striking us where it hurts at times, but not as incendiary as last year.
Posted by Willow at 11:33 AM