All photographs in this article are part of a photography exhibit I'm doing at a local library. If you live in the wild West Kootenays of British Columbia and would like to know the details about this exhibit, please email me at willowsweb [at] hushmail.com


These are photographs of open oil flares, well sites, and pumpjacks on and around my parents’ ranch in southeast Saskatchewan. They depict a scene that is very common to see on the prairies. Tens of thousands of open oil flares exist on the Canadian prairies, burning off and releasing toxic by-products of oil production into the surrounding environments, including benzene and other hydrocarbons and heavy metals. Other gases, particularly hydrogen sulfide (H2S), are released from the well sites themselves often in concentrations many times higher than allowable government limits. There is also radioactivity being released from oil well sites. Many well sites and flares are short distances from people’s homes, as there is very little regulation regarding where these can go or how many can exist in a certain area. In many cases, as in southeast Saskatchewan, multiple well sites and flares are clustered into small areas.

I was reprimanded by a battery operator while taking these photographs of a flare on the oil lease. I could tell he was considering confiscating my camera... 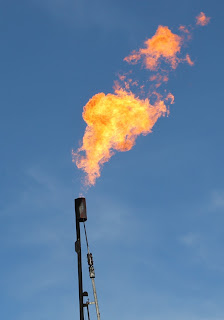 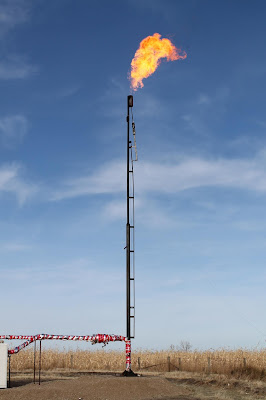 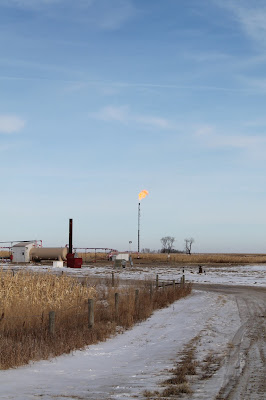 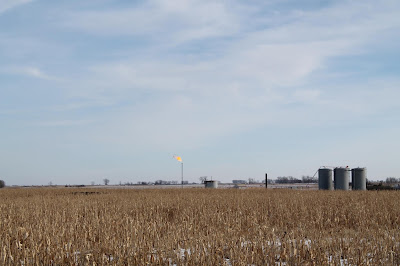 I grew up living amidst oil activity. The foul smell of the gases around the well sites was considered something that was normal to live around. We laughed about it as kids when being driven past a particularly rank oil battery or flare.

In recent years, oil drilling has gone on at a frenzied pace in my home area. The first open oil flare on my parents' ranch went in less than a mile south of their house, and it was like a punch to the gut to see this blazing, toxic orange flame on the grassy landscape. It was alien, dystopian, post-apocalyptic looking.

Within seven years, there were three more flares surrounding my parents’ home and a couple dozen pumpjacks. Two of these flares are directly across the road from my parents’ house and can be seen from their living room window.

The quiet of the prairie is no longer. The hellish squeal and moan of pumpjacks is omnipresent. 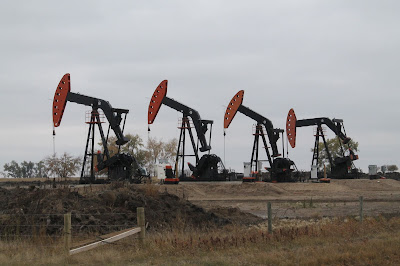 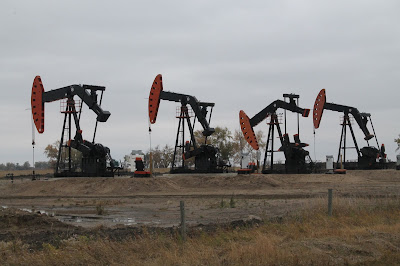 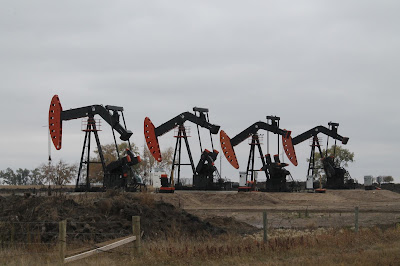 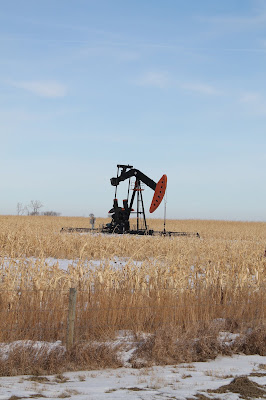 One of the most deadly gases being released from the oil well sites themselves is hydrogen sulfide (H2S).

Multiple independent audits of wells in the area have shown horrifically high releases, many times higher than allowable government limits.

As reported by the University of Regina journalism school (from which I am a graduate), in a 2015 audit of 43 oil wells in Saskatchewan, poisonous H2S gas was found being released at an average of 30,000 ppm.

The allowable limit for H2S releases is 10 ppm.

The lethal level is considered to be 1,000 ppm. 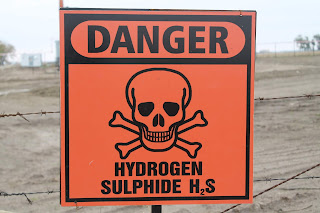 The highest level of H2S gas found being released in that audit was 150,000 ppm.

The Saskatchewan government claims it has found no regulatory breaches by the oil industry that need to be followed up on by them.

H2S is only one of the toxic by-products being released at well sites. When H2S is burned off in a flare, other toxic substances are released, such as sulfur dioxide. A single flare can release dozens of toxic by-products, including benzene and other hydrocarbons, dioxins, and heavy metals. There is no monitoring of these.

Open oil flares and the releases from well sites have been linked to a range of health problems and diseases, including cancer, autoimmune disorders, heavy metals poisoning, respiratory damage, chemical sensitivity, miscarriages, birth defects, and livestock deaths. Headaches, nausea, and vomiting are commonly experienced after exposure to the gases.

And people live in this. Every day.

They’re getting sick and dying from this. 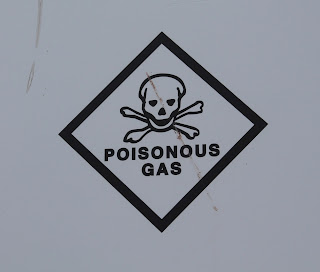 All around these flares and well sites, in the sparsely-populated surrounding areas, there has developed a cancer cluster as well as an increased incidence of autoimmune disorders and other health problems. Very few neighbouring ranches or farms have not been visited by some devastating health problem at one time or another.

As little girls, my sister and I played with another little girl who grew up on a neighbouring ranch. We rode our bikes or walked down the gravel road to her place to play Barbies or to play with new kittens. She developed leukemia when she was 18 years old, received chemotherapy, moved away, and has been cancer-free since.

My Dad's childhood friend and his wife lived about ten kilometres from us. His friend's wife developed cancer and has battled it for almost two decades. His friend was diagnosed with cancer more recently, prior to them retiring and moving to town.

Another rancher and his wife live a few kilometres to the east, close to a huge flare near the highway. His wife was diagnosed with cancer a number of years ago and has had bouts of chemotherapy since. He suffered from a disorder that involved vertigo and, at times, had a difficult time doing his work. 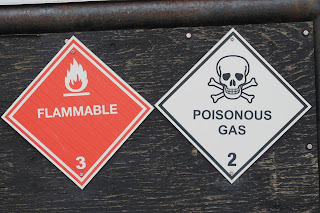 That man's brother also lives nearby, a rancher and now-retired battery operator. He drove a circuit five days a week as a battery operator, visiting and monitoring multiple oil sites each day. He suffers from arthritis, inflammation likely caused or exacerbated by the chemicals and gases he was exposed to on the job, and is now in kidney failure.

The medical establishment, the oil industry, and anyone benefiting from those things would argue there's no connection. That it's all just a bit of bad luck.

But I know better.

People are scared to speak out. They’re scared to question the activities of the oil industry. The oil industry provides most of the “good-paying jobs” in a working class area that is struggling mightily to survive and to preserve its way of life.

Surface or mineral rights or an oil job provide the income that often means the difference between a decently comfortable life and constant, grinding financial hardship.

Many people in the area maintain their farming and ranching cultures, the life that runs through their blood, a life on the land, with income from the oil industry.

They gamble their health away.

They risk a shortened life.

They look the other way.

And the government does the same, filling its coffers with oil profits.

The oil industry could pipe these gases underground and capture them. In many cases, the gases could then be used for other purposes. But this would cost the oil industry money. It would require infrastructure. Maybe some new technology. So the current rule is that capturing these toxic gases has to be economically viable for the oil companies. Otherwise, they can use open oil flaring.

The true cost of oil production is being passed on to the people in this way and to the animals that live and graze around these flares and oil sites. They shoulder the burden for the oil industry with their own ill health and shortened lifespans.

The dangers of oil pipelines are much-discussed these days. There is much less public outrage and knowledge about the direct threat to human and animal health caused by open oil and natural gas flaring and unmonitored releases from well sites.


A documentary by the University of Regina journalism school, my alma mater:

Crude Power: An Investigation Into Oil, Money, and Influence in Saskatchewan


Stop the Oil Industry From Open-Air Flaring! A Toxic and Dangerous Practise

- DYSTOPIAN FLAMES: The True Cost of Oil Production on the Canadian Prairies  -

by Willow of Willow's Web Astrology 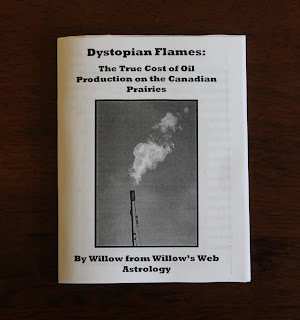 - a 24-page pocket-sized 'zine on open oil flaring and the release of toxic by-products from oil production, going on across the Canadian prairies

- includes a photojournalism spread from oil sites in southeast Saskatchewan

Please contact me at willowsweb [at] hushmail.com to order, or it is available at the Etsy shop.

All Willow's Web Astrology 'zines can be found here.
Posted by Willow at 3:33 PM

The Dystopian Flames photography exhibit has just opened at my local library.

A few days before it opened, the woman I wrote about who had been battling cancer for decades passed away.

A day after the exhibit opened, I learned that a friend of my Dad's, whose photograph is featured in this exhibit, has been diagnosed with cancer for the second time.

I also learned that the retired battery operator who is in kidney failure is receiving a kidney transplant. The kidney is being donated by his sister.

The toxic effects of the oil industry, coupled with intensive chemical farming, are very real, and they are devastating my local area.