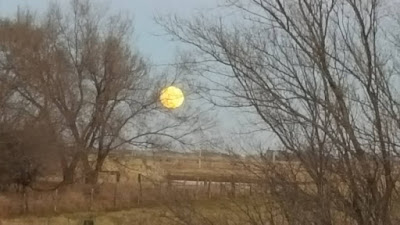 Media, scientists, astronomers, and astrologers seem to be making a huge deal about the upcoming Full Moon at 11 degrees Leo on January 31, calling it a "SuperBlueBloodMoon" (Christ.) and creating all sorts of hyped-up woo-woo around it.

The Full Moon at 11 degrees Leo (opposite Aquarius Sun) on January 31 falls at perigee, meaning the Moon will be at the closest point to Earth in its orbit. Because of this, the Moon will appear larger than usual in the night's sky. In astrological terms, this is a Full Moon opposite Black Moon Lilith, the symbol for the lunar apogee. This Leo Full Moon is also a total lunar eclipse, and it is the second Full Moon in the calendar month, referred to as a "Blue Moon."

I try to neutralize this hyped-up energy because it's actually dangerous.

It's known that "the elite" have used astrology for millenia to plan their events, and this practise continues to this day. War manoeuvres are one area where it's quite obvious that astrology is being utilized.

Two major recent "wars" initiated by the United States/NATO - the unjustified invasion of Iraq in March 2003 and the unjustified bombing of Libya in March 2011 - were timed to Uranus ingresses around March equinox. We have another Uranus ingress around March equinox in the near future - March 2019 when Uranus re-enters Taurus after a retrograde period. If the pattern continues, we can expect more warmongering hell to be unleashed at that time. Let's hope we can break the pattern. The symbolism of Uranus (rebellion, revolution, sudden changes, upheaval) indicates that we can.

The real deal is, war maneouvres have gone undercover in many cases. We are being attacked on multiple levels that are not even being recognized by the mass public. (Unexpected financial attacks or attacks to the financial systems/currencies are one possible theme for Uranus transiting Taurus.)

I would suggest that the timing and energy of the last hugely over-hyped eclipse in Leo - a New Moon total solar eclipse on August 21, 2017 - was used to unleash extreme weather warfare in the form of Hurricanes Harvey and Irma, followed by a destructive earthquake.

From September 3, 2017: Hurricane Harvey, the Total Solar Eclipse, and This Era of Unnatural Disaster

This way of reporting lacks context. Without understanding context, we are at the mercy of a media that creates Event Bubble after Event Bubble, never showing us the broader picture or filling in the blanks as far as how it all fits together. We see situations as existing in a vacuum, as randomly-occurring and isolated events.

So we have to look at the hype surrounding this Leo Full Moon eclipse at perigee (as well as all similar celestial events) for what it is: artificial, unnecessary, and potentially dangerous as we have a "look over there!" diversionary scenario unfolding in the general public - a prime opening for the powers-that-be to misuse celestial energy and slip some nastiness by.

It's also really exhausting to be this artificially jacked-up about anything, and I believe this is another reason certain subjects like this Full Moon are woo-wooed to death. Our minds and our energy are being hijacked, burning us out on it all.

We regularly experience Full Moons at perigee. Again, "perigee" means that the Moon is at the closest distance it comes to Earth in its orbit. The term "SuperMoon" has unfortunately caught on for a Full Moon at perigee (which sounds as if they're trying to supersize the Moon a la McDonald's marketing), but I would suggest this is part of the hype machine. Three or four Full Moons each year can be classified as at perigee, falling in succession. The Cancer Full Moon on January 1, 2018 was also at perigee and so was the Gemini Full Moon on December 3, 2017. We experienced another uber-hyped Full Moon at perigee on November 14, 2016 at 22 degrees Taurus (pictured above), which was "the closest the Moon has been to Earth since 1948!!!!!" That Full Moon was flanked by two other Full Moons at perigee - on October 16 and December 14, 2016. We'll experience another set of Full Moons at perigee January 21, February 19, and March 21, 2019. The March 21, 2019 Full Moon at perigee at 0 degrees Libra (cardinal point) marks equinox and also Uranus re-entering Taurus. This indicates conditions that have that extra special occulty goodness the powers-that-be so often use to time war manoeuvres/attacks and other "random" events.

A Blue Moon is not really a big, hairy deal. The term "Blue Moon" refers to the second Full Moon in a calendar month. Depending on how much stock you put in the Gregorian calendar, this is not really all that significant. Blue Moons are not rare. We will experience other Blue Moons on: March 31, 2018; October 31, 2020; August 31, 2023; May 31, 2026; December 31, 2028; September 30, 2031; July 31, 2034; January 31, 2037; and so on. You can see - if a month has 31 days, it's not uncommon for two Full Moons to fall in that calendar month. We can also experience two New Moons in a calendar month (generally much less hyped), and the second New Moon is referred to as a Black Moon. The last Black Moon we experienced was October 30, 2016 at 7 degrees Scorpio, and the next Black Moon we will experience is August 30, 2019 at 6 degrees Virgo. (Disclaimer: some people use the terms Blue Moon and Black Moon to refer to the fourth Full or New Moon in a three-month season.)

So this Leo Full Moon total lunar eclipse at perigee, the second Full Moon we will experience in January 2018, is certainly significant and noteworthy. It is a particularly beautiful celestial event in our night's sky. The questions are whether it is hype-worthy (is anything ever really hype-worthy?) and why there is so much hype generated around single astrological/astronomical events such as these.

This Leo Full Moon conjunct the North Node of the Moon indicates a heart-directed culmination point - but one that requires that we unravel and deconstruct the machinations of the Kings and Queens (Leo) holding illegitimate positions of hierarchical power on our planet. The horrific events surrounding the Leo New Moon total solar eclipse in August 2017 would be a prime place to direct our gazes...

Eclipses indicate the potential for powerful backdrop changes with ripple effects extending for at least six months. As the Moon grows big and full in royal Leo, there are many illegitimate Kings and Queens of all stripes ready to be toppled from their thrones.

Enjoy this beautiful and magical Full Moon eclipse in heart-centred Leo. Feel the love under these lunar rays. But do so with your feet planted on terra firma. It's better that way." 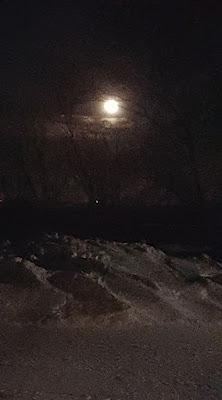