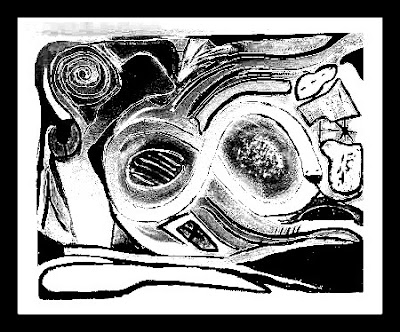 Love, relationship, and society planet Venus re-enters Scorpio on December 2, following a retrograde period that spanned from October 5 to November 16.

We were taken to some deep and complex social/relational places during the retrograde, and now Venus is direct, moving full speed ahead through the sign of its detriment as we close out 2018.

Venus is moving over the wake that was kicked up during the retrograde process, and anything we experienced in relationship or with society since September 2 (when Venus first entered the retrograde shadow) may be coming up for full integration.

Venus is advancing the social/relational scene in transformative fashion as we close out this year, but in the sign of deep, dark, sometimes-disturbing emotional and psychological subtext (Scorpio), the realizations we're integrating into our relationship dynamics are not the easiest to swallow.

We're looking at things like: power and control dynamics, the role of fear in our relationships, detrimental karmic attractions, manipulation, underhanded motivations, frenemies, energy drains, abuse, mistreatment, lack of integrity, suppressed emotion, unresolved trauma, and the things the society around us tries to keep buried.

Venus is a planet that likes to keep a smiling, congenial face no matter what the conditions, but as it moves through Scorpio, that smile may turn into a snarl a time or two...

There's a lot of social/relational yuck associated with Venus in this hardcore sign, and with Venus moving direct over this socially-charged zone, we are required to address it and change it once and for all, rather than looking the other way and pretending it isn't there.

We're setting the emotional and energetic trajectory for the next eight years of our lives in the realms of relationship, social life, values, and money, and every not-quite-right dynamic we let slide has the potential to come back on us in unpleasant ways later on.

Scorpio is a sign that relates to addictions, and with Venus transiting Scorpio until January 7, 2019, we're addressing some hidden addictions in ourselves, in our relationships, and in our society.

Scorpio is also a sign related to detrimental karmic patterns, like addictions, that play out generation-after-generation due to suppressed emotion, psychological damage, and unresolved trauma.

We make the hard stop. We draw the firm line. We say no and no and no again until we've broken through. Until it loses its charge and its draw. Until the moth no longer gives a shit about the flame...

The standard, recognized addictions in our society certainly cause enough misery and mayhem: drugs, alcohol, gambling.

But with Venus in "deep subtext" Scorpio, we're required to dig up even the socially-accepted addictions, the addictions that are allowed - that are straight-up engineered by our power structures - because they bolster and fuel the toxic and dysfunctional societies and systems within which we are existing.

I've said in the past that without coffee (or similar stimulants), there would be no consumer capitalism - at least not the rampant, go-go-go, "constant growth" model that currently exists.

And you can see how many of the socially-accepted (and socially-engineered) addictions work to reinforce this sick, soulless, and unsustainable model of society and economic production. They work to keep people content within a system that is slowly (or not-so-slowly) poisoning them.

Some of these socially-accepted addictions include:

➝ workoholism or constant "busy-ness"
➝ caffeine, sugar, and processed food addictions to fuel the workoholism
➝ obsessive accumulation (money, property, cars, etc.) or compulsive shopping
➝ habitual "social drinking"
➝ over-reliance on prescription medications
➝ co-dependency, being addicted to another person or to a relationship
➝ sex addiction or serial dating
➝ an addiction to the high of falling in love, leading to an inability to maintain a stable, long-term relationship because the high wears off, and the person gets "bored."
➝ cell phones, social media, video games, television, film, and music - the inability to remain unstimulated by one or more of these things for even a short period of time (very prevalent in the younger generations)
➝ narcissistic obsessions with physical appearance, the body, status symbols, luxury lifestyles, and fame

The roots of addiction often (not always) involve unresolved and unacknowledged trauma and grief. Often, there is a root to the trauma and grief of generations past that have been brutally exploited by the wealth- and power-holders of their day.

Eventually, the roots became "invisible." So many generations wanting to put it all behind them that this tyranny was placed into an "olden times" context, far removed from our current day, despite the obvious signs that it was still with us and still wreaking havoc.

And the systemic violence and poisoning of the people that continue to current day, embedded in the very structures of our societies, became "invisible," too. The violence of a corrupted (Scorpio) money system (Venus) and the corrupted (Scorpio) societal values (Venus) that go along with it became invisible. Just people going about their daily lives. Nothing to see here.

We're being poisoned by the current power structures, by the governments and corporations and financiers and Old Money bloodlines. It's in our air, in our water, in our food, in our psychic and mental environments. It's layer-upon-layer of radiation, chemicals, heavy metals, electromagnetic pollution, poisoned emotions, forced rhythms, manipulated media, artificial values, corrupted food, degraded life.

As Venus picks its way direct through the emotional/psychological landmines of the sign of Scorpio, communication and intelligence planet Mercury (currently retrograde) will be back in late Scorpio from December 1 to 12, as well.

The Mercury retrograde process (November 16 - December 6) has been strongly coloured by Neptune in Pisces, a placement associated with the invisible or unseen realms. Mercury stationed retrograde in Sagittarius in an exact square to Neptune in Pisces on November 16 - the very day Venus went direct. Neptune is currently very potent in the zodiac, stationing direct at 13 degrees Pisces on November 24.

In addition, wounded healer Chiron is extremely potent at this time, stationing direct on December 8 at 27 degrees Pisces.

The invisible, wounding dynamics, generational grief, and high collective karma associated with Chiron in late Pisces colour the Mercury direct station and the (often dark) realizations we are coming into. Mercury stations direct on December 6 at 27 degrees Scorpio in an exact trine to stationing Chiron at 27 degrees Pisces.

This combination of Scorpio and Pisces/Neptune indicates that dysfunction around invisible addictions - many with roots to unaddressed trauma and/or generational grief - will be coming up to be addressed. We will also be required to address blind spots related to the addictive nature of modern society and to the toxic social dynamics in which we are immersed.

In many ways, current, consumption-driven societies are built on these invisible addictions. The standard day is often structured around them, going from one fix to another to another, continuing under the guise of normalcy and standard routine.

Scorpio is associated with suppressed emotion, and one of the main seats of suppressed emotion in the body is the liver. In particular, suppressed anger and rage are stored there. (And honestly, if you aren't at least a little irritated with the state of things on this planet, you aren't paying very close attention...)

We have generation-after-generation of suppressed rage running through our biological systems, as well as a heaping helping of rage to process within our current moments, the rage that bubbles and boils just below the surface of day-to-day life. The rage that too-often erupts into violence and destructiveness, including the subtle emotional/psychological warfare running so rampant in human society these days.

If you look at many of the addictions that are playing out - drugs, alcohol, coffee, sugar, chocolate, processed foods, overeating (especially red meat) - they give an absolute shit-kicking to the liver. So do the roiling emotions kicked up by the toxic ways in which people are interacting with each other.

These angry livers need our attention. They need us to remove the layers of poison that are providing their daily, socially-accepted beatings.

But more importantly, we must address the toxic systems and structures that force these addictive coping mechanisms.

It's all well and good for the upper and upper-middle classes to look down on the less financially-privileged as "unhealthy" in their habits.

But poor, working class, and even many middle class people have not had the luxury of being insulated via financial privilege and social status from the most toxic and terrible conditions of these systems.

They often do not have expendable income for massages and acupuncture and therapists and energy healers and Pilates classes and organic groceries - methods used by the upper and upper-middle classes to make it through the day.

Often, these people are doing work at which the upper and upper-middle classes would turn up their noses.

The truth of the matter is: in most cases (and across most socioeconomic classes), people are not living lives of their own choosing. They're living forced lives on artificial rhythms and schedules, repugnant to a free and natural human being. Enduring this state without reprieve has highly detrimental effects.

Our societies are being engineered to be this toxic, this dysfunctional, this anger-inducing, this full-on insane and inhumane.

And it continues with all those unaddressed, socially-accepted addictions providing (toxic) structure and routine to our day-to-day. It continues because the people who are benefiting from it simply go along with it. They justify it.

As lovely Venus moves through the sign most fear to experience (Scorpio), the way we love ourselves and each other, the way we love humanity and the living creatures on this planet, is to peel these layers of addiction, exposing and addressing the real root causes.

We have to support ourselves and those around us to make the changes that are needed, even if these changes seem quite radical. They seem radical only because they are so long overdue...

Venus has been in an extended opposition to Uranus throughout the retrograde process. The final exact opposition occurs November 30 on the potent anaretic (29th) degrees of Libra/Aries. Social and relational change is needed, and we're the change agents who have to make it happen. It starts with our own lives and our own relationships, including our relationship to the addictive substances that are being used to soften the pain, to deal with the dysfunction, to cope.

Use the Venus transit of Scorpio well. Address any addictions (even subtle) in yourself and in your relationships. Find healthier, kinder, more loving and honest ways to nurture those emotional roots.

Bring the deep, ancestral anger up, and validate it. It's legitimate. It's real.

But then use it as fuel to outsmart the socially-engineered traps that have been intentionally set out for us. See through the hierarchical bullshit - even when it benefits you in some way to go along with it. Refuse it. Refuse to accept the charity model as adequate. Work to change the power dynamics, creating a society and a system of currency where charity is not necessary. Refuse to take your cues from a soul-sick and damaging social order. Refuse to poison yourself, your relationships, or your community for even one more second.

Venus in Scorpio says: we deserve much better than this.

Now, we just have to demand it.


Willow's Web Astrology videos on some of the unaddressed emotional and psychological subterfuge:


⧫  The Mansplain, The Nitpick, and The Gaslight - Emotional and Psychological Subterfuge  ⧫

⧫  Narcissism, Gaslighting, and Rejecting the Cult of Image  ⧫