The wounding Piscean era themes are nip, nip, nipping at us through the end of November, and we're going to have to stay awake and alert in order to navigate our way through.

This is tricky because with these stations, things are a little sleepy, a little dopey, and a little...any of the other applicable Seven Dwarves.

The Moon enters Pisces tonight (8:36 p.m. CST) until early morning Wednesday, and this can exacerbate the effects of these stations.

I would sum the vibe of the next ten days up like this:

"Why bother changing into pajamas? I'm just going to have to get dressed again when I wake up in the morning."

These stations can have the effect of softening sharp edges, putting a warm glow over the proceedings. But things can also be slipped by us through these stations, and we can find ourselves doing things or allowing things that are not in our usual characters. You can read about some common Neptune stationing effects here: Neptune Stations Direct and Brings the Foggy, the Floaty, the Wispy, and the Surreal

"Hollow-gut disappointments hang around us like stale fumes. End-of-era love relationships are a confusing, disorienting mess. The idea that our dreams are not special, that we're not special under egalitarian Aquarius, can erode us at the heart. The discrepancy between where we hoped we'd be at this point versus where we really are is staggering at times - both personally and on a broader societal or collective level.

Anyone aware of the circumstances of humanity on Planet Earth at this time will find them humbling, to say the least...

Some lingering depression, disappointment, disillusionment, despondency, or a sense of utter futility about carrying on from here can be expected for the next couple weeks...There's an unfulfilled sadness in the air, in the collective psyche, so watch to make sure you or your loved ones don't tip too far into the psychic bleak.

The new guy wasn't who you hoped he was. The new job that seemed so interesting turned out to be more of the same. The daily grind seems increasingly dull, painful, pointless, hopeless. Reaching for the bottle, for the bong, for junk food, or for the credit card are all possibilities to dull the pain, to desensitize.

This is standard end-of-era backwash, however. More end-of-Pisces clearing. Fool me once, shame on you, Neptune. Fool me twice, shame on me.

Keep moving, keep flowing, and keep laughing at the insanity of the situations with which we are faced in this foul year of our Lord two thousand and thirteen.

It's the sensitives, the creatives, the Piscean/Neptunians who hold the true weight of where we are right now. They're the ones holding the energy of Pisces, the energy of the spiritual whole, where every last detail matters and nothing can be conveniently amputated or ignored without problematic future repercussions. They're the ones potentially being crushed under the cruelty, the inhumanity, and the dysfunction of the current scenes. Yes, it's that serious.

But it's also funny.

To be set up with these seemingly impossible clusterfuck scenarios during our lifetimes on Planet Earth?

It didn't start with us, and it doesn't end with us.

But we do have a prime and shining opportunity to direct things now.

Neptune stationing, like prominent Neptune in the natal chart, can create a sort of stoner effect on even the most sober among us. Air-headed and flaky. Forgetful. Dreamy. Wistful. Pie-in-sky. Avoiding. Self-pitying. Indulgent. La La Land-living.

Stay on track and stay focused on your own newly burgeoning Aquarian-era ideals, despite the Neptunian fog tempting us to go down maudlin back alleys or to take diversionary, wishful-thinking detours. We have plenty of assistance in keeping our feet on the ground with the Neptune trine to concrete and steady Saturn in Scorpio. Focus on dealing successfully with the full reality in front of you, and the rest will take care of itself."

Do whatever you can to keep your spirits up. Keyword: buoyancy

Mercury, now direct at 2 degrees Scorpio, is exactly trine stationing Neptune in Pisces, and at the very least, we are assisted with whip-smart intuition, X-Ray vision, and whispers from the otherworldly guides in order to penetrate the potentially painful dynamics.

Maintain your black sense of humour about the current conditions, speak up when you need to about the things that are oppressing you, and, above all, just keep going. 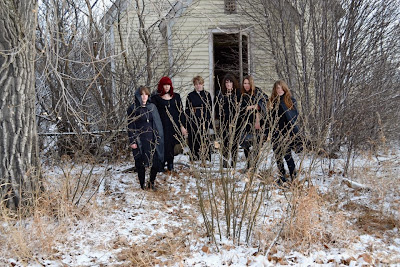 To ease our suffering minds, here's a little homegrown flavour, The Seahags. "On the Rock Where Moses Stood" and "Barefeet" are particular gems!
Posted by Willow at 3:19 PM

And of course, we have another Chiron in Pisces, ocean-related horror show going on in the Phillipines right now.

I'm so, so sorry, Filipinos! You're in our thoughts and our hearts.

This storm is being compared to the 2004 tsunami that washed over Indonesia and Sri Lanka and killed an estimated 230,000 people.

This is a video taken by a man in the Tokyo suburbs in December 2011.

He bought a Geiger counter and tested his back yard. What he found were levels of radiation twice as high as the ones used by the Soviets to evacuate Chernobyl.

He evacuated himself and his family all while the Japanese government insisted (and still insists) it is safe to live in the area and in areas even closer to Fukushima.

Recall that the Daiichi reactors have been releasing radiation into the atmosphere and into the Pacific Ocean day and night for two MORE years after this video was taken.

None of this will hit the mainstream media any time soon.

I have been feeling this Neptune transit especially since it is sitting exactly on my Ascendant right now. Mercury trining Neptune as it stationed has inspired my creative writing projects these past few days.

Willow, do you hold with some astrologers that Chiron is the new ruler of Virgo, or maybe co-ruler with Mercury? He's very important in my natal chart - conjunct Mars in Capricorn - and I don't know if I buy the "wounded healer" as a Virginian. Since he was a centaur, I lean toward Sagittarius, possibly.

Anyway, thanks for another fine article. Bless you for your beautiful words and presence. :-)

I feel so weird since Neptune stationed direct. Very anxious and overwhelmed.

Greg F, I have sensed a connection between Virgo and Chiron in the past. The health and healing angle.

Do you think you will let me do a fire camp there? :-)

Greg F, I remember Zane Stein (Chiron-centred astrologer and researcher) said he thought Chiron related to a process that takes place between Virgo and Sagittarius. Something like that. You can look into his stuff if you are interested in the rulership debate.

"Why bother changing into pajamas? I'm just going to have to get dressed again when I wake up in the morning." Ha ha! Love ya Willow! Have found this energy so overwhelming and in fact have come down with a bug. But your piece helps me so much. Thank you. Glad you wrote about the Phillipines. I can't stop thinking about the horror they're living through in that part of the world.

My heart is breaking for the Filipino people right now, too. The Filipinos I've come into contact with have been so sweet, humble, industrious, hard-working.

It does seem that the death toll is not as high as was feared. Nothing like the horror show in Indonesia/Sri Lanka in 2004. So some good news.

Definitely an overwhelming time for anyone sensitive to collective suffering.

The yahoos who think it's all about their own personal enlightenment are probably doing just fine right now, though!
The New Age has them convinced that the mass deaths and destruction just mean they will be "leveling up" soon.

Don't allow it to get you down, everyone!

Thanks dear Willow! Feel much better today. Been quite a week. Am glad the death toll isn't as high as expected, though the big worry now is getting food and water to people. Yes, I agree, the Filipinos are a lovely people, and they really know how to stick together and help each other out. I confess that I googled the spelling of Phillipines (and copied and pasted it just now!).

But still got the spelling wrong Oops!

Oh, I spelled it right the first time!

I saw a different spelling and thought it was my error, but I guess it was theirs.

Thanks for this, Will. Needed it today.

If anyone would like to buy a Seahags CD, Beaumont Film&Records in Saskatoon has them. $10 each plus shipping.