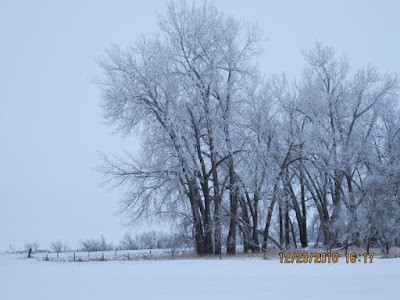 Have we entered an Ice Age already? Nah, it's just the Canadian prairie in December. Weeks of unnatural grey and cloud with only the slightest of sunny breaks. All Winter in a Day.

I know the world has gone all to hell since entering 2011 (when isn't it, though, really?). 'Biblical' floods in Australia, birds falling dead from the sky, haywire weather all over the damned place, high profile killing after high profile killing. There has been a definite acceleration, and it will keep getting faster.

The purge is on to remove anyone who isn't a "true believer" from the ranks as we head ever-closer to the first in the series of seven squares of Uranus in Aries to Pluto. The last series of Uranus in Aries squares to Pluto coincided with the Nazi purges of their ranks. It also coincided with the beginning of Stalin's. Just for a little context. That was closer to the end of the square series, but as I noted before, they're getting a jump on it straight out of the gate this time around.

And this is not to be flippant about it.

The Gulf Loop Current being severed has sort of left us screwed, blued and tattooed. We've got not only floods to look forward to but major temperature fluctuations and probably drought, if the scientific predictions are on the money. Add your standard HAARPicanes, tornadoes and frequency-induced earthquakes, and well...we've got a whole big manufactured 'End Times' shindig going down on this little spinning planet. Par-tay. They don't call it Revel-ations for nothing!

People are starving to death as manufactured food shortages and stock market speculation/derivatives schemes drive the price of food globally to "record highs." Remember that 'biblical' flooding in Pakistan's breadbasket this summer? And the flooding and devastation of crops in Canada's breadbasket? Unbeknownst to most supermarket shoppers, that's where food comes from. So flooding out those areas = not good.

But if some overprivileged dipshit with a stylish, stylish life isn't yipping about it on Twitter, no one pays all that much attention.

The injustice of purposeful starvation, leaving people to wither and languish...well, I know many find it cliched to actually care about your fellow human beings this far into Pisces, but it makes me weak. It makes me feel ill. It makes me want to burn myself in protest...

Oh, wait. I already do that. Via Combusta gal and all.

So yes, this is all kinds of miserable. And intolerable. I want to write about it. Expose it. Put it here in black and white so no one can go on denying what's happening. But you see, Saturn is stationing retrograde right now smack dab on my natal Pluto. Pluto plays a major role in my chart and in my life, and this transit is taking up a lot of energy.

So bear with me as I trudge through the waves of existential horror. (The worst part about Saturn transits is they make it all so concrete and in-your-face!) I'm hanging by the skin of my teeth here at times.

The good news is:

Jupiter is about to move into Aries January 22. New territory in the biggest of ways. One more layer of tail-end Pisces drops away.

We're in that period of time when every single body in the zodiac is moving forward, so you know a lot of progress is happening. I wouldn't really know due to that aforementioned Saturn stationing on Hellzone, but I'm sure it is. I'm sure of it! Saturn breaks the spell January 25 by turning retrograde at 17 Libra.

Mercury moves into Capricorn January 13 and out of its retrograde territory (yes, we're still in retrograde shadow degrees!) January 17. My computer has been buggy since Mercury entered the shadow, so we'll see if this improves things at all. Sure, Mercury hits a conjunction to Pluto immediately after leaving the retro shadow degrees, but you know...it's at least SOME news, maybe not the best news.

Mars leaves Cappie for Aquarius January 15. We're at that point in Canadian winter where you just have to get weird to get through it. The Sun enters Aquarius January 20, bringing the full-on detached bizarreness of it all.

January 19, we have our fourth of five anaretic degree Full Moons. The Moon will be at home in its own sign here - Cancer, of course.
Posted by Willow at 3:44 PM

Hi Willow,
More gruesome details at Cosmic Chronicles but the eclipse map illuminating. If NY Times actually publishing 'the truth', when are people going to wake up? Course, the Times kinda cried wolf a lot during the Bush admin.
Yeah, Saturn's backing up on my TBM Lilith and thence back over Merc square my node cj Mars which Pluto's cj so it's a real party all round - or is that square?
Happy weirding from my hole in the snowbank - we're getting 10-15cms overnight.

What makes me even more sad than starving and dying humans is the fate of animals and other beings on this planet that we have induced.

Humans in peril at least get some mention in the media and compassion from other human beings. Often at least some help, too.

Animals hardly ever get any of that. They're being viewed as either pets, food, food producers or unwanted objects. This is an especially sad testimony to us as a species, since animals are so similar to us.

By the way, I'm not sure whether high food prices are really that much related to speculative stock market action. In my view the weather and the lack of responsible long-term planning are much, much bigger factors.

Willow, I marvel at your strength and ability to type that all out. Not to mention the processing of it all to put it into words.

Overwhelm time. My mind reels with so many responses I can't get a single one out.

It's all coming globally, nationally, astral'y, right outside my front door. The machine in my lap keeps relaying dozens of "oh fuck!" moments.

Nope, still spinning. But at least we're doing it together.

Hey! Tell more about this winter weirding. I do the summer weirding so I'm keen to know about the other side.

Leslie, I disagree that food being brought into the derivatives schemes isn't a major factor here. I wrote a post on it in August and linked to some very compelling stories on the subject:

I also disagree that human suffering gets much compassion or action these days, especially outside the wealthier countries.

Cairo...I'm not sure how the weirdness will unfold this year. We'll have to wait for Mars and Sun in Aquarius for things to get bizarre-o!

Can things get any more bizarre-o?

I'm sure they can.

Willow, on the bright side, you're gorgeous!

I hear you on this post. Loud and clear! It's effing cold in the North East. Effing cold and snowy! Trying to make the best of whatever time we've left, though :).

And, yes, things can definitely get more bizarre-o. Can you feel it?!

Oh, yeah. We haven't even seen bizarre yet. I can definitely feel it coming on. Uranus in Aries takes it to a whole new weird zone...

The pluto/saturn thing is rough as! As you know I have had mine recently, and with the retro I will soon be going for rounds two and three, so I know all about it. All I can say is that I am a different person, to whom I was going into it, and everything that is not essential to myself and my life has been pulled away from me.....but I am feeling better now with a new view on what is real and important...... hang in there.

Leslie, I disagree that food being brought into the derivatives schemes isn't a major factor here.

Derivatives are a tool, nothing more. So if we agree that free markets are a good thing, then they're just another metaphorical knife -- use it to cut vegetables (determine a fair price for a good) or abuse it by stabbing someone (using fiat money to flood a market).

So yes, I agree that in that particular instance the market has been manipulated into artifical highs that didn't really match reality. But a certain type of financial instrument isn't at fault here.

What do you think?

I also disagree that human suffering gets much compassion or action these days, especially outside the wealthier countries.

I don't know about Canada, but here in Germany you get lots of advertising that attempts to coax you into donating money for "poor hungry people in Africa" causes. The same thing for animals? Not really imaginable.

There is no such thing as a free market. They are all heavily manipulated and controlled.

The irresponsible deregulation of derivatives is the major problem here. So yeah, in their current state, I would say they are at fault in the creation of the record food highs and more starving people. It's how the tool is used, sure...but it's also how that tool is shaped, what powers it is given, where and for what reason/end goal it can be used...and that's where there are major fucking problems. Derivatives have become criminal.

In Canada, there are many, many organizations for animals, feral cats, etc. I see members of PETA staking out street corners talking about animal rights. I don't see the same thing as far as human rights. So, again, I would disagree that humans are being taken care of and animals are left out in the cold. The two are inextricably linked. We can't elevate the care and status of animals when human beings are left to languish, and that is what is going on.

Dear Willow: for myself I can barely put a thought together much less a written one, but it truly and deeply moves my withered soul to read your measured words of righteous rage. Thank you for doing so during your own difficult time.

Thanks for your comment, Diane. It's rough, I know. We have to hang in there together.