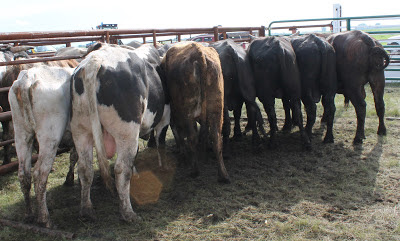 The first case of GM alfalfa contamination is now being investigated in Washington state in the U.S. after a farmer had his alfalfa crop rejected for export because it (unknown to him) contained genetically modified material.

This is the first case of what will be many.

Monsanto's Roundup Ready GM alfalfa is the first genetically modified feral perennial ever planted in North America. Pollinated by insects and the wind, this highly tenacious plant used for livestock feed and organic fertilizer, among other things, spreads like a weed. In fact, if you do not want alfalfa in your field, it is extremely difficult to eradicate.

As seen in the initial case in Washington state, genetically modified alfalfa will inevitably cross-pollinate and contaminate the natural crop.

Currently, 93% of Canada's alfalfa crop is unsprayed. This means, farmers and ranchers do not have to pay thousands of dollars to apply chemical herbicide or pesticide to their alfalfa crops. These crops are natural, non-genetically modified, and unsprayed.

Since Canada's federal Conservatives are as pro-GMO as you can get, the next step in appealing to our so-called leaders is at the provincial level. Municipal governments in British Columbia have passed laws making their areas GMO-free, and there is no reason provinces cannot do the same.

I wrote a letter recently to my home province's Agriculture Minister, Lyle Stewart, appealing for a moratorium on the sale, planting, and growth of genetically modified alfalfa within the province's borders.

In the letter that he more than likely did not see or write, our boy Lyle passed the buck to the Federal government and denied there are any concerns over GM alfalfa at all.

"Lyle" went on to say: "The Government of Saskatchewan takes a science-based approach to promoting research, commercialization, and marketing of all aspects of agricultural biotechnology. We are committed to working with the industry to ensure farmers and ranchers have the latest advancements in agronomic and production tools available to help them remain competitive."

In other words, the Government of Saskatchewan is pro-GMO and (falsely) believes farmers and ranchers need GM alfalfa in order to "stay competitive."

Now, y'all, if Lyle knew his ass from page eight on this subject he'd know that farmers and ranchers in Western Canada - yes, including in his own province - have already rejected GM alfalfa wholeheartedly.

He would know there is actually zero benefit to going from an unsprayed, natural crop to a heavily chemically-sprayed GMO crop that costs thousands of dollars more to produce. And farmers and ranchers know this. Anyone with common sense does.

Our boy Lyle would also know that, rather than making farmers and ranchers "more competitive," the unintentional spread of GM alfalfa will actually destroy export crops to any country that does not allow GMOs within its borders. This is the entire European Union, which happens to be a big importer of Canadian alfalfa.

He also touts the science. But what science would that be, Lyle? The Seralini study showing increased incidences of cancer, organ damage, and premature death in lab rats fed GM corn and glyphosate, the primary ingredient in the chemical herbicide Roundup?

Or would it be the suckling pig study that found stomach inflammation and fertility damage related to diets of GM corn and soy?

Or is it the study that found Roundup toxic to dairy cattle?

What, exactly, is the science you're using to support your pro-GMO claims, here, Lyle?

Lyle Stewart is Willow's Web Astrology's Douche of the Day!


Congratulations, Lyle. It isn't just any old douche who makes it to such a high level of douchery!

"Now, y'all, if Lyle knew his ass from page eight on this subject he'd know that farmers and ranchers in Western Canada - yes, including in his own province - have already rejected GM alfalfa wholeheartedly."

hey there, Willow! you are brilliant. if douchebag Lyle knew any better he'd hire you as a consultant on this topic. thanks for sounding the drum. it is beyond pitiful how we're being taken for a GMO ride here and pity the poor farmers and their livelihoods being held hostage. unfortunately it is going to take more cases like the one you mention to waken people up. grrr. hopefully those farmers bearing the brunt of this issue getting front and centre will be properly compensated in the long run. shame on our utterly lame politicians. grrrr.

Shame on them, indeed!

It's beyond belief that they are this ignorant on the subject of GMOs and GMO contamination.

Good article. I like your style of writing. But since this is supposed to be an astrology blog, it would be nice if posts contain more astrology and less politics, especially because there are people like me (who are not from Canada) who enjoy reading your posts.

Thanks for recording this serious matter for all posterior. It cannot now be denied that the Ag Minister is far less useful than a cow's behind.

On the other hand, you, Willow, are doing an outstanding job as Prime Astro-Minister of the Northern Hemisphere. Big vote of confidence from us Yanks. You'd have my vote anytime.

Anon 9:15: It would be nice if you'd eff off. Your opinion is about as necessary to me as tits are on a bull. You are not welcome to read my astrology with an attitude like that, anyway.

Anon 9:28: Prime Astro-Minister of the Northern Hemisphere! haha That is the coolest title ever. I hope my prior comment to Anon 9:15 doesn't change your opinion of me. It's just that people like him are not welcome around these parts! As if I'm going to separate astrology from pertinent politics at this crucial stage in the game...

AND, Anon 9:15, you've officially won YOURSELF the spot of Willow's Web Astrology's Douche of the Day!

Go away and find some other astrologer to read, and if you do, I won't put you up on the site!

Mundane astrology has always been political, its purpose is to make sense of events unfolding... Anon 9:15 is missing the point... and was quite rude. I dont understand where someone gets the nerve to tell someone how their energy should be spent?!?

Where is the astrology in this whole article, my dear hysterical willow? I was only asking to keep the astrology seperate from the politics, so that people from all over the world coming to your site for the astrology of it would find it useful.

It is a shame that you are unable to take some constructive criticism in the right spirit. Please change the word 'Comment' at the end of posts to 'Applaud please - fans only'.

No i am not going to stoop down to your level by responding to your filthy remarks. Not my style. Good luck. Go in peace.

Anon 9:15's comment annoyed me into buying a voluntary subscription. I am only able to afford the cheapest option, but am happy to offer what I can to keep this site going AS IS. Love what you do!

Dear Willow, this is your home and you have every right to refuse entry as well as kick people out. As for anyone telling you what to write and how to write it...the same goes. Free speech and free thought and all that.

It's your unique and individual take on the world that keeps me interested in your blog, for heaven's sake. ;) And fwiw, I subscribe to the 'Be who you are and say what you feel' motto. Those who matter won't mind if you do. LLAP!!!

"Where is the astrology in this whole article, my dear hysterical willow?"

Secondly, who ever said this blog has to be 100% astrological? This blog has always, always been sociopolitical, and if you don't like it, this is not the blog for you. Plain and simple.

Third, I'm not hysterical. But people like you have been calling women like me 'hysterical' for centuries now as a way to discredit them and to "put them in their places," so I'm not surprised at this passive aggressiveness. That's what it is, not "constructive criticism." (I can sniff you people out a mile away, by the way.)

By asking me in your ridiculously, ridiculously entitled way to separate politics from astrology, you miss the entire point of my blog. Yes, I find that insulting. And no, I don't want people with your attitude reading here.

If you can't grasp how the release of GM alfalfa in Canada might have some ripple effects into the rest of the world, you are too daft and too dense for me to dignify with a response.

And if you think my "remarks" are filthy, you obviously haven't been following this blog for very long. Bahahahaha!

I was being genteel there, motherfucker.

If you don't like political pieces, don't read them!

Seriously, why would anyone take the time to complain about this post?

"All I want is the free astrology. Wah! Wah! Wahhhhhh!"

I know the current astrology scene breeds entitled and narcissistic individuals, but this is a bit too much for me to tolerate.

Seriously, politics and all sorts of global events (weather, murders, etc.) are mentioned in nearly all astrology blogs I've visited over the years. Why pick on yours?

I think the comments here are a perfect illustration of the end of the Pisces / Neptunian rainbow coloured smoke being blown up everyone's backside and the harsh alarm being sounded by new Aquarian ideals. That alarm is as loud and rude as an air raid siren, but necessary to shake that fog.
I enjoy your writing, Willow and I encourage you to continue "keeping it real".
Another "insult to injury" here in the states (re our food supply) is the US agreeing to allow imported chicken from China.
Thousands of pets died or were made very ill because of contaminated chicken "treats" manufactured in China. How do we expect to keep humans safe if we can't even protect our pets from toxic products produced in China.??
Obviously, as with GMOs, it's all about that corporate bottom line, and the consumer can go f*ck themselves.
Farm animals and pets are even lower on that scale.
Why anyone wants "weed free" alfalfa at the cost of it being sprayed into toxic levels is beyond me.
Decades ago, folks also thought DDT was "safe", until Mother Nature cried out.

From my experience, Anon-15 is obviously not getting it at home (or the brothel or wherever he goes) and is getting so frustrated that his passive aggressive critiques are not giving hem dominance anymore that he thought he'd give it a try on line with our juicy Willow.
Sure bit him in the douching place, didn't it. Good job Prime Astro-Minister of the Northern Hemisphere, and, keep re-charging those hot little batteries of yours for as long as needed at this time. Your recent output has been phenomenally dense, instructive and deeply life enhancing for me.And the depth of the energy and concentration that you put into your work is palpable to me. I hope more of your readers were incited to subscribe after reading that ridiculous and inconsequential patriarchal narcissist's instructions to you about how you should run your business. You Go. Don't Stop Doing It Your Way.

I was actually thinking just that--gov't operative
shows you what kind of hands the public is (are?) in. sad.