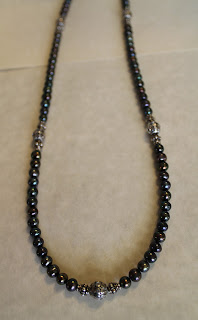 Venus transiting Scorpio has resurrected (Scorpio) my jewellery-making mojo (Venus) after a substantial hiatus, which has been surprising and very nice. You can see some of the new pieces along with the old at Weeping Willow Designs.

I also discovered that my silver company - which announced its closure due to the high price of silver last year - has been resurrected and is back in business after a move to California. This is a very nice expression of Saturn in Scorpio: the resurrection of businesses once thought dead. The turbulence and changes we're going through certainly have the possibility of kicking up surprising reversals of fortune.

So after thinking the jewellery factory that is me had been officially retired, there is the possibility of a continuance. I won't be getting back to Art of My Heart-style factory output, but a little retirement gig here and there would be nice.

Mercury is currently moving direct through the final degrees of its retrograde shadow in Scorpio, just past a conjunction to the North Node. The jewellery is handmade (Mercury), and I'm using other people's resources (beads) to do it (Scorpio). I've also been using beads that were given to me as gifts, which is always special.

Uranus is stationing direct. We're heading into the Dark of the Moon in Scorpio ahead of Thursday's potent, post-eclipse season Sagittarius New Moon. Jupiter is conjunct Black Moon Lilith in Gemini. And we have those Yods making things a little edgy and a lot weird.

Finding a productive outlet for the jingly jangly energy is important. Keep your hands busy whenever you can, and stay out of Mercury in Scorpio worst-case-scenario thinking. Touch things. Nice things. Like pretty rocks or crystals or other things that can take a charge.

The tensions break a little coming out of the Sagittarius New Moon December 13.
Posted by Willow at 6:03 PM

Thanks Willow!! Ah THAT explains the resurgence in my own business which was creaking along for most of 2012. Your insight helps. Jean

December 8 was also the three-year anniversary of me being poisoned by Cipro...and my mother's birthday!

Thanks for the succinct message, Willow!

So beautiful to read about this resurrection! :) Wishing you continued creativity and fun...

Happy birthday to your mama. We celebrated my father-in-law's birthday today. I love Sagittarians!