Art of My Heart Compilation 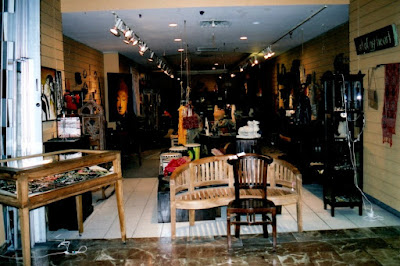 They're my well-loved original designs, made with semi-precious stones, freshwater pearls, and handcrafted Bali silver beads. All findings and earring hooks are sterling silver. And they all have a little bit of Art of My Heart energy in them, which is now priceless.
Art of My Heart in its original location (photo from 2007)

Tales from the Retail Frontlines Episode #1 - Fun With Mature Souls

I'm searching for something of importance in what she's saying to me like a tuner searching for a channel, but it's all static. A wall of irritating, buzzing, ego bass trying to force its way into my system. A crack has developed in the teak frame of a mirror she purchased. Unfortunately, it happens. It's tropical wood trying to adjust to Calgary dryness. The owner can repair it. I've let her know. She knows. There's some back story. Apparently the owner said he would get her a different mirror on his next trip to Bali. I explain. The owner had a stroke and now the store is closing. He won't be going overseas again any time soon. I try to nudge into her consciousness that things have changed. She's pissed that he didn't let her know. I guess because she should be top of the list of post-stroke priorities. Her indignance over this mirror shows no sign of letting up. She doesn't want a store credit. She wants this mirror. The items from this store are knock-em-dead beautiful. Even if she found something similar elsewhere, it would be three times the price. “I'm sorry, but as I said, you'll have to talk to the owner about repairing it. I have your name and number, and you have his, so that's all that can really be done right now.” That should be that. I've given her the next step to having her problem solved. I can't fix it myself. The owner is not in. Arrangements will have to be made with him. She's not going to get answers this minute, and I guess that's the problem. Frustrated demands for instant gratification. She's a person who is used to people jumping when she says jump, whenever she slaps the Visa Gold card down. So she buzzes on, past the point where I've done what I can do about it. I guess she didn't get the memo that I'm too old and bored for this shit. Because my calm, matter-of-fact demeanor sets her off. She's gunning for a reaction. Wants to goad me into “crossing the line” with her. Ha. Please. “Well, thanks for all your help! It's great that you're so nonchalant about it!” She's using her hands to make her point, and I can't help but notice the biggest fucking blood diamond I've ever seen on her left finger. Blood on your hands? Yessum. She's expecting the usual corporate, “customer is always right” ass-kissing. In this store, you get realism. At least from me. And I see it's not going down too well. She's an eyeroll-inducing cliche. Over-privileged mature soul with all the entitlement issues that capitalism has taught her to have. And so am I. Tired old soul who can't be bothered with this ridiculousness anymore. (War criminals running our nations. Media propaganda. Depleted uranium poisoning. Deformed babies. Tortured prisoners. A million dead Iraquis. 3,500 dead American soldiers. 119 dead Canadians and counting. 1,800 dead Katrina victims who were supposed to “just drive out of there.” Working class dying for the rich man's stock portfolio. The Amazon is almost gone. Appalachians are being clearcut. Alberta oilsands poisoning our water and land. Natives with bizarre cancers. The biggest white collar crime in history committed against the people. Teen girls with Chanel purses. Wage slavery. Domestic violence. People are hungry. Misery. The trail of homeless pushing their shopping carts through the snow outside my apartment window. Drive-by shootings on the next block. The store is closing. Kicked out of our location due to Toronto-prescribed gentrification plans. My inflated rent is due. The dentist wants $400 for a cleaning and check-up. They hate you if you don't have those big, bleached Chiclet teeth. Only yuppies can afford to buy real food anymore. The rest of us are being slowly starved.) I'm being berated because I can't rouse the last of my righteous indignation for her. Because there's a crack in her teak mirror frame and she can't have it fixed as soon as she snaps her perfectly-manicured fingers. What injustice. How can I go on in such a world? When she finally understands she will get nowhere with the likes of me, that there's no use picking at the corpse, she leaves in a perfumed huff. I take a breath and still my Scorpio guts. Another customer, a man, who has been quietly perusing the art the whole time this scene was going on, turns to me and says quietly, “Patience is a virtue.”

Tales from the Retail Frontlines Episode #2
From June 9, 2009

Mid-twenties customer holding designer purse: "I don't know. Two hundred dollars for a piece of art? I could buy a pair of jeans for that, you know?"
Me: [blank look]
Art of My Heart's new, ground floor location - we operated there for a matter of months until the owner's lease was not renewed by the mall.

RIP Art of My Heart

(AKA Dodging and Weaving to Avoid the Pluto in Capricorn Steamroller)

I'm just waiting. Inside the fortress that is me. The only place that feels good.
I'm waiting for this wave of hyper-gentrification to run out of steam so that I can properly assess the situation. At the moment, even walking down the street feels like a blast from an overexposed dystopian imagery furnace. Fake light and happy, grinding its pointy high heel into my eye. A nouveau riche nightmare. Teenagers in brand new, sickeningly overpriced clothes designed to look "lived in." Street-tastic! Carrying Chanel purses (yes, high schoolers with Chanel), cell phones, and iced coffees.
They look straight out of the pages of InStyle (Star/People/US Weekly) magazine, so I can see why they feel entitled. That takes a lot of effort.
Mount Royal Starbucks where you'll get the snobby once-over just for going in to get a take-out coffee. They can sniff out non-upper-mid-class-yuppie status.
It's a fucking wasteland. Sorry, but it is.
The so-called alternative crowd drinking overpriced, artisanal beer, eating overpriced breakfasts in pseudo-retro diners, sitting around in carefully chosen "styles" being all alternative and shit. Talking about how to market their band. Hoping to be noticed, to get famous. Even the indy crowd in this town has a marketing veneer lacquered over everything.
No one just living their lives. It's all an agenda. Gotta be someone. Gotta get somewhere. Gotta play the game.
Calgary, Alberta. Schlepping phony Western Canadiana for kicks, but the mean, mean underlying vibe is always there. Vicious millionaires bulldozing soulful establishments and people's livelihoods in favour of clean, cleansed luxury for its clean, cleansed luxury-deserving patrons. A city run by and for young souls. You can throw in a few newly-minted mature souls just to give it that fake "artsy/cultured" thing. Garbage. Trying to lure the people who don't know any better into dropping their money on overpriced drinks and food, clothing and accessories. Paying for fake experiences with fake fiat currency.
The downtown mall has kicked all the real stores out in favour of luxurification plans handed down by Torontonian property management overlords.
Brooks Brothers is coming to town! How thrilling.
Spaces are empty all over town. All over the country. All over the world. Bulldozed livelihoods. Lost our lease. Lost our lease. We're closing shop. And in a way, the independents are relieved. Because trying to keep your head above water in this increasingly corporatized climate is bloody exhausting. They tighten the vice little by little. Priced out. Squeezed out. And when the death of the business finally comes, it's accepted with a sigh.
And so I wait for the bulldozer to run out of gas. Or to at least take a fucking coffee break.
I can see it starting. "Luxury" stores aren't lining up to fill those empty spaces. The spots are sitting empty. Stalled monster condo projects all over town. Massive, gaping holes left in the ground with fences all around. They got ahead of themselves, trying to build on phony foundations.
And here I sit. I'm not sure what things are going to look like or if there will ever be a place I can stand being in again.
Art of My Heart is dead. And every fucking brainless weasel in this town can go to hell.
Art of My Heart's new, ground floor location
Original bead jewellery designs
My sweet little beading desk in the backroom
(Yes, I was a wee bit disgusted with the Pluto in Capricorn hyper-gentrification steamroller at the time, and I'm still disgusted with it today. Today, at the end of the Pluto in Capricorn transit, we have another monster wave of business closures, as small businesses are deemed "non-essential" by powerful people who don't need to work all that much for a living and have not missed a paycheque since this orchestrated madness began.
All that said, the two-and-a-half years I spent at Art of My Heart provided a lot of joy in my life, and I'm ever-grateful.)

All Art of My Heart articles