As we move into the month of September, the four bodies transiting Capricorn – Pallas Athene, Jupiter, Pluto, and Saturn – all station direct in quick succession from September 5 to October 4, 2020. Action and direction planet Mars will also station retrograde at 28 degrees Aries on September 9 in tight square aspect to Saturn in Capricorn and in loose square to Pluto in Capricorn. These stations indicate a quick change in direction after a period of behind-the-scenes restructuring and preparation.

After a summer with the Capricorn bodies in retrograde motion, characterized by simmering angst over the manufactured global pandemic/largest psychological operative in human history, the authoritarian power structures are primed to go full speed ahead yet again as they attempt to cement outrageous and rights-stripping rules, protocols, and structural realities in lock-step all over the planet.

As the bodies in Capricorn turn direct in the sign of rules and structure, many students will be returning to school, and academic institutions become a primary focus for the top-down implementation of the “new abnormal.”

Because the rollout of 5G infrastructure was continued surreptitiously during the “lockdown,” including at many schools, many students will be returning to an intensified electromagnetic soup of 5G-driven wifi, cell phones, and cell towers that is even more dangerous to their health. We can add to that the 600 satellites being beta tested in lower Canada and upper U.S. in September, with more satellites being launched all the time. There are current applications for a mind-boggling 100,000 satellites with 12,000 already approved.

Electromagnetic radiation-related health effects will, of course, be blamed on the virus or some other “mystery illness.” The idea of regular Covid testing for students and teachers (with a flawed PCR test that produces up to 80% false positives) is being floated, and this could lead to any number of rights violations. The World Health Organization has already declared itself the right to remove people from the home who are deemed a viral health danger, including children. Inflated numbers could be used to implement a mandatory or at least “highly recommended” vaccine – a vaccine containing messenger RNA (for the first time in history) that is currently being fast-tracked with many skipped steps as far as safety testing.

The really inspiring thing is that, under the Mars in Aries squares to Saturn-Pluto in Capricorn, people all around the world are coming together to resist, oppose, and protest the authoritarian controls ushering in this top-down globalized scheme. All around the world, people are saying No. They're standing in their own power and sovereignty, overriding the influence of illegitimate authority in their lives and societies, and this is a very great thing.

The restriction of our movement, the erosion of our personal sovereignty, the removal of our privacy, and the trampling of our rights, especially health-based rights, continue to be the most acute battle points, the points of highest-intensity resistance from the people, into early 2021. This is indicated astrologically by the extended transit of Mars through Aries in clashing square aspects to Saturn and Pluto in Capricorn.

Mars first entered bold-and-brash Aries on June 28, 2020, and it will not leave the sign of the warrior, its domicile, until January 6, 2021. The retrograde period is September 9 to November 13, 2020. As the power schemes attempt to implement more and more control over our daily lives, the people must push back each and every step of the way. 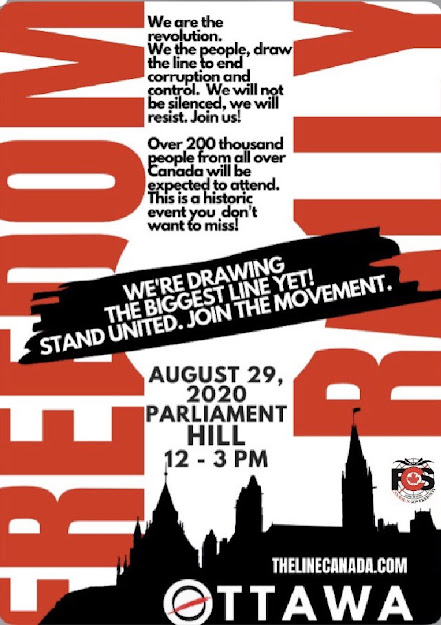 This past Saturday, August 29 was a day of freedom rallies around the world protesting the corrupt power establishment, the unconstitutional "lockdown," mandated masks, vaccines, the crippling of small businesses, human trafficking, pedophilia, the 5G grid, and establishment oppression and control, in general. We have a lot to protest!

These rallies were going on all over the world. Massive rallies were held in London, England, and Berlin, Germany, in particular. (Complete with controlled opposition agents David Icke in London and Robert F. Kennedy Jr. in Berlin. They always have to get in on the biggest scenes, don't they?)

Rallies were going on all over Canada, as well. The largest rally was at Parliament Hill in Ottawa, Ontario - the location of the federal government. The weather was not nice at all (cold and rainy) but the estimates for the crowd were still between 6,000 and 9,000 people. You can see a quick pan of the crowd in this video.

Thank-you to Letitia Montana (Humanity Rising on YouTube) for posting videos of the rally. This footage will certainly not be seen via mainstream media. We are the media.

There were some truly inspiring and impassioned speeches at the rally, and we've only just begun.

Start of the Protest

Final Speeches of the Rally

I particularly like the first man's speech in "Speeches Part Three." He is one of the organizers of Hugs Over Masks, a group doing ongoing protests of mandatory masks, social distancing, and other elements.

Action and rebellion planet Mars now stations retrograde (September 9), extending the squares to Saturn and Pluto in Capricorn, and the infringement on our rights and freedoms is becoming intolerable at many points. We must act. We must speak. We must resist both individually and as a group.

Coincidentally, August 29 was also a date when multiple big box stores declared that they were going "mandatory mask." My city bus had not been enforcing the mandatory mask rule but started enforcing it on August 29, as well.

Even the World Health Organization has said asymptomatic people spreading the virus is "very rare," so this forced masking of healthy people becomes more a ritual of submission than an issue of public health, a visual indicator of the compliant versus the dissenters. This works to divide society even further, and there have been many recorded incidents of people in masks becoming hostile and even violent toward people who are not wearing masks.

This is a video of Tammy Clark, an expert on Personal Protection Equipment like masks, explaining why masks don't stop the virus and why it is actually dangerous to force people to wear masks without testing their oxygen levels and taking other factors into consideration first.

Dentists are also speaking out about a phenomenon called "mask mouth" that develops from long-term mask use. They are seeing gum disease and cavities at an increased rate - in up to 50% of patients who wear masks long-term.

It would be "very rare" for a healthy person to spread the virus. Why, then, are we masking healthy people and risking infections, gum disease, cavities, bacterial pneumonia, oxygen deprivation, and suppressed immune systems from long-term use of the masks?

You can state a medical exemption without disclosing your health condition.

Some of the health conditions that are cause for a medical exemption include:

- respiratory problems of any kind

- extreme emotional or psychological distress from covering your face

Doctors in Tulsa, Oklahoma are now suing the city over the mask mandate. Dr. Meehan speaks about the ineffectiveness of masks in stopping the spread of Covid-19, as well as their dangers in this video.

Mask use has been shown anecdotally to cause staph infections, even with new masks worn for as little as an hour. Thank-you to Patrick Corbett for compiling and sharing these. 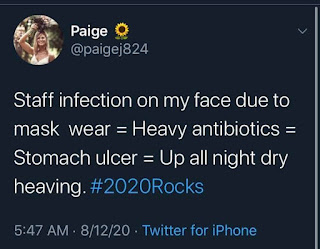 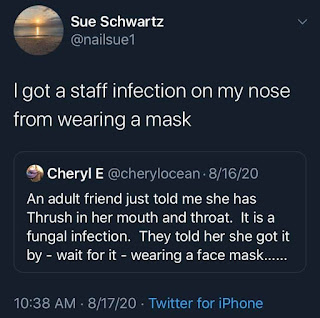 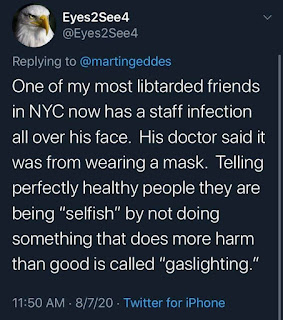 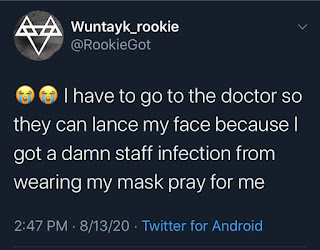 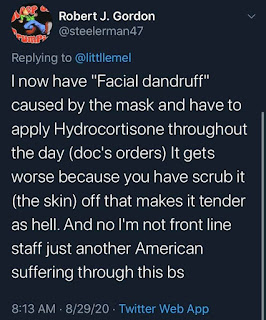 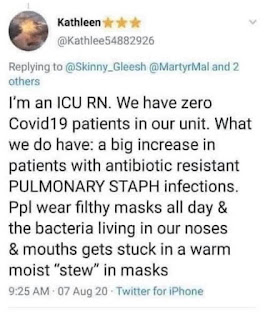 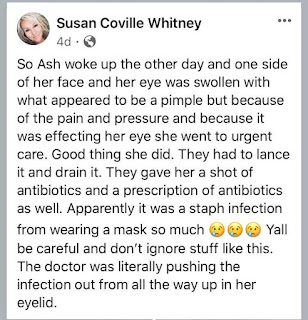 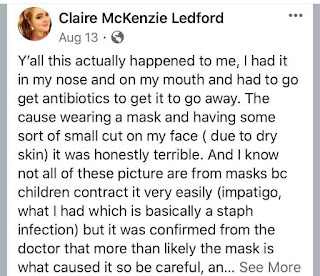 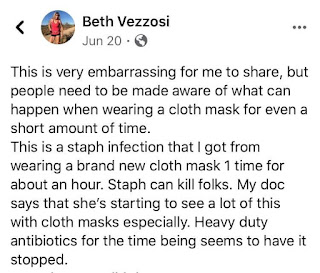 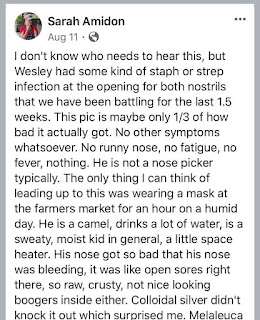 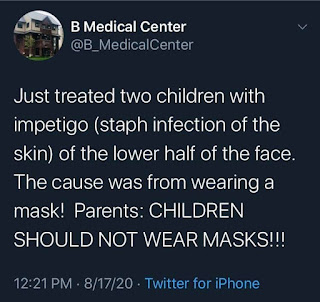 I've been in contact with some of the organizers of the ongoing freedom rallies, and people are welcome to protest 5G at them, as well. This is really good news, as there is literally no freedom, privacy, or personal sovereignty under the 5G control and surveillance grid.

The orchestrated and establishment-funded "defund the police" protests are designed to usher in a technology-based police state that uses artificial intelligence (literal Robocops), drones, facial recognition cameras on every lamppost and building, and video surveillance of nearly the entire planet via satellites. This technology-based police state involves constant monitoring and tracking of our every move and our every word, and they want people to actually welcome this level of surveillance into their lives as necessary and beneficial.

Drones are already being used in Australia and France to hunt people down who are not wearing masks and to find vehicles that are "too far from home." This is simply a soft run, attempting to bring in a state of constant surveillance through technology that will spread around the world. This is not about a virus.

In Fort Worth, Texas, there is another soft run underway - ROSA, the responsive observation security agent. *shudder* This is a robot implanted to enforce mask compliance.

"The World Health Organization announced that the COVID-19 pandemic may be around for two more years. Trinity Metro in Ft. Worth, Texas has installed ROSA, a robot that can detect when people are not wearing face masks. The CEO of the company said that his mind was blown by how many more people are complying with wearing masks when a machine tells them to do it. He also said that sales are increasing as businesses are bracing for the possibility they’ll have to enforce Covid-19 safety measures for “years to come...”

When ROSA recognizes a person about to enter a business without a mask, you hear and see the warning immediately."

If you think our rights and freedoms magically come back, if you think the surveillance state being put in place just disappears when this virus passes and things are "back to normal," please think again. The orchestrated pandemic was designed to bring in and legitimize this authoritarian globalized control. The authoritarian globalized control is not being brought in and our rights are not being trampled to contain a virus that is no more deadly than a bad flu strain.

From May 18, 2020: "Channeling Pallas Athene as we Thwart the Advancement of the Technocratic State"

From March 22, 2020: "The Use of Astrological Timing and Symbolism by the Power Establishment: Orchestrated Attacks around March Equinox"

From March 17, 2020: "New Moon in Aries at Apogee Conjunct Chiron: Resisting "Medical" Martial Law, the Surreptitious 5G Roll-out, and the Expansion of Authoritarian Control in Our Daily Lives"

There is an upcoming freedom rally at the Vancouver Art Gallery in Vancouver, British Columbia, Canada on September 13, 2020 from noon to 5 p.m. If anyone is planning to attend and would like to protest 5G, I'm happy to help with a speech or with information and links to share with protesters. I've also made a series of Ban 5G memes that can be printed and used as posters or handed out as flyers. 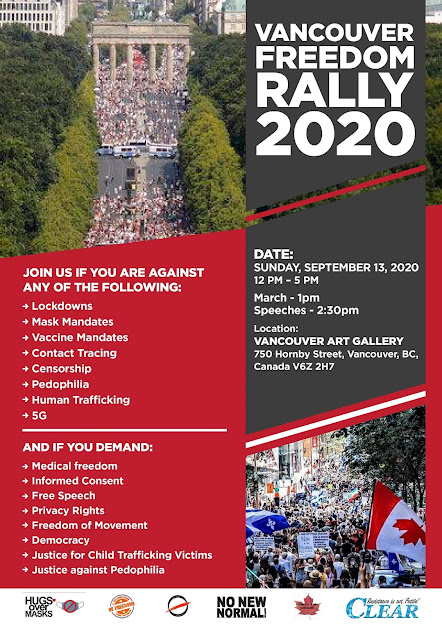 Freedom rallies are ongoing around the world.