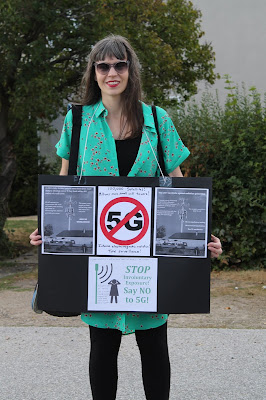 Thanks for the photo, Kim!

I did a little one-woman protest in my (uber mainstream) town yesterday for the 5G Global Day of Protest. I do many ongoing actions against 5G, and I ultimately think this is what's needed, but street protest can definitely be part of those actions.

I made a poster board sign and printed off some handouts of Ban 5G information in case I came across interested parties. I talked about the handouts in a video I made of the protest, and if anyone would like copies of those materials, email me at willowsweb [at] hushmail.com. Thank-you to graphic artist Valerie Jacquemet for the use of the Ban 5G graphic.

I won't lie - the atmosphere was quite tense. There is a lot of hostility toward anti-5G activists and people concerned about 5G. It reminds me of the virulent hatred I (and others) received as an anti-GMO activist in the early days before more people realized the danger they posed.

This protest happened under a tight Mars-Saturn square with Saturn stationing direct. The tension and edge-of-danger energy of this square was reflected in the general atmosphere of this protest day. The global day of protest against 5G coincided with many anti-lockdown protests around the world, including this one in Establishment Central of Canada, Toronto, Ontario. Between 2,000 and 3,000 people marched. Mainstream media reported there were 100 people in attendance.

People have to risk hostility, hatred, violence, and even arrest in order to peacefully show opposition to what's being brought down in lock-step all around the world. Peaceful protesters were beaten by police with batons in Trafalgar Square in London, England. Other peaceful protesters were tasered and arrested in Holland. This is the kind of police state insanity people are facing when exerting their natural-born rights to peacefully assemble and protest tyranny.

Under the Mars-Saturn square, independent and active resistance (Mars Rx in Aries) comes into tense, frictional, and potentially hate-inducing contact with the established authoritarian order (Saturn stationing in Capricorn). Saturn stations direct tomorrow night (10:11 p.m. PST) at 25 degrees Capricorn in a square to Mars Rx in Aries that is exact September 29.

If you don't like what's going on on the planet, now is the time to push back in whatever ways you're comfortable. However, the harsh conditions make it necessary to get in and get out, to quickly do our thing and then move to safety. These are not conditions in which to push the limits.

I started my protest by standing on the sidewalk of a busy intersection on the main drag through town and displayed my sign to the vehicles going by. I was positioned beside a public bulletin board where I have been routinely posting 5G posters and information. These posters have been ripped down repeatedly - four times now. I decided I would just be the bulletin board for a little while.

As I moved on to start my walk down the main drag, I looked over at the bulletin board and saw that someone had put a poster up: 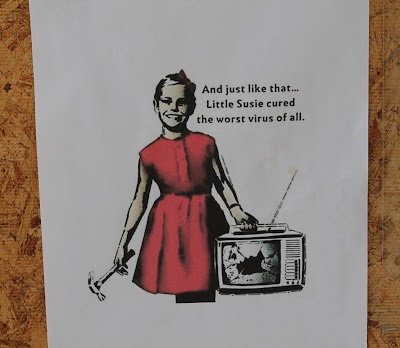 It was pretty delightful to see this, and it encouraged me to put my own posters up yet again, so I posted a couple Ban 5G memes. (Yes, they will be ripped down at some point. I wonder if Susie will remain?)

I walked up the main street in town and back. It was Saturday, so there was a fair amount of traffic. I saw a lot of curious people taking a gander at my sign.

The reaction was mixed. I had two people in two separate vehicles fake laugh out their windows at me (very hostile-sounding). The level of hatred this type of activist work is spurring is quite remarkable. I had one honk of support and a man who smiled and waved as he rode by on his bicycle.

I ended the walk at City Hall. I have been lobbying the mayor and city councilors here to look into the dangers of 5G for a few months now with little success, but at least it is on their radar screens. I will continue pressing for answers to my questions - particularly if there are plans to make this community into a Smart City - and for an official response on the 5G rollout.

Overall, I pulled it off without blatant hostility or hatred coming my way - but just by the skin of my teeth. I'm glad I did it, but I would advise caution to anyone who wishes to protest 5G publicly like this. In many ways, I think my energy is better directed through writing and sharing information, public education, letters to the editor, lobbying City Council for a ban, encouraging and supporting other activists/concerned people, and protecting myself and loved ones from EMF. Working behind the scenes...

In solidarity with all the people around the world who are protesting heinous 5G and the authoritarian power grab! You're brave, and you kick ass. Please keep at it.

Video of the protest: