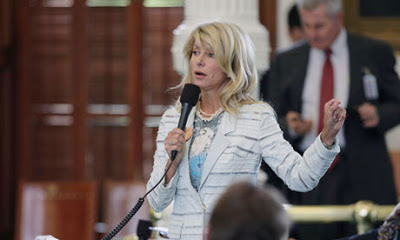 Davis successfully talked for 11 straight hours on the floor of the U.S. Senate June 25 to stop an anti-abortion bill from reaching Republican Governor Rick Perry's desk. This is a move called filibustering.

As Davis spoke and the midnight deadline of the Senate special session passed, the bill was officially dead - for now.

Through her actions, Davis is drawing attention to the ongoing attack on women's reproductive rights in the United States. Abortion is an issue that often has difficult emotions associated - shame, guilt, sadness, fear, anger. Perfect Black Moon Lilith territory. Abortion is often kept in murky, unspoken territory in our patriarchal societies. Davis standing up on this issue in such a dramatic way - supported by men and women around the world - helps move abortion out of the shadows and into place as a basic, human health issue - where it belongs.

The anti-abortion bill Davis filibustered would have banned abortion past 20 weeks of gestation, limited abortion-inducing drugs, and required that abortions be provided at ambulatory surgical centres by physicians who had admitting privileges at hospitals within 30 miles. This requirement would have closed 37 of the 42 abortion clinics in Texas, severely limiting access to abortions, especially for rural women who do not live near a hospital.

You may recall that Rick Perry is the Texas Governor who passed the forced sonogram laws in 2012, which required women to have a transvaginal sonogram before they could have an abortion. The laws, which were passed in four states - Texas, Arizona, Florida, and North Carolina - required doctors to basically attempt to talk women out of having abortions right at the abortion clinic itself.

"These sonogram laws, brought about by pro-life Republicans, force all women seeking an abortion to submit to a transvaginal sonogram of their fetuses - involving a probe that goes into their vaginas - as the characteristics of the fetus are described to them by their doctor. The woman is then asked if she would like to see the sonogram and hear an audio recording of the fetus' heart. She can refuse this, but she cannot refuse the procedure. And in North Carolina, any woman who refuses to look at the sonogram or listen to the heartbeat has her name marked and kept in a record for seven years. The doctor is also required to discuss alternatives to abortion. Under these sonogram laws, women are also forced to wait 24 hours after the sonogram before they are able to receive an abortion, unless they live more than 100 miles from the abortion facility."

Perry and his like-minded brethren are chipping away at abortion rights and limiting access to abortions all across the United States.

With Pluto transiting Capricorn, there is much societal backsliding going on in the way of women's rights, and especially women's reproductive rights.

There is a cloying nostalgia for good old days which were never really all that good - definitely not if you were female, gay, black, brown, poor, or working class. I wrote about this dynamic here: Pluto in Capricorn Retrospective: It's All Just a Norman Rockwell Painting, Isn't It? 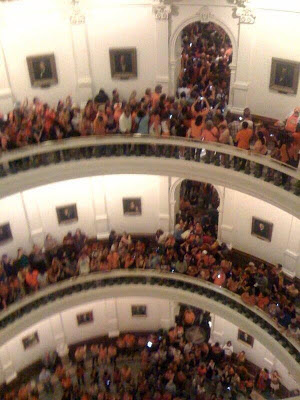 She talked for 11 straight hours, reading letters from women and doctors who would be adversely affected by the bill. She could not sit down, lean on the podium, or take any breaks in speaking, aside from listening to questions from other politicians.

As you can see from the photograph above, Davis may have been standing alone as Black Moon Lilith on the Senate floor, but she was not standing alone with this issue.

Davis has Sun and Mercury in Taurus. This indicates she's stubborn, enduring, and has a slow-and-steady-wins-the-race ethic that ensured her filibustering success. If anyone has the stamina to speak for 11 straight hours, it's a Mercury in Taurus. Not to mention, being a Venusian, she was easy on the eyes and the ears while she did so.

Davis has natal Venus in Aries and Mars in Leo, both fire signs. Davis' fight for women's reproductive rights is apropos with feminine Venus in warrior sign Aries. Her Mars in Leo indicates she has a sense of drama, that she is comfortable in the public eye, and that her actions can bring her some level of fame - especially when fighting.

Davis is one of those Pluto in Virgos I keep talking about, being placed in positions of power so as to facilitate systemic change as we shift into the astrological Aquarian era. True to generational form, Davis is taking on a health issue (Virgo). Her Moon and Saturn in Aquarius indicate that she is advancing the structures (Saturn) for women's (Moon) health. She knows where we need to go, and she has taken on the responsibility and the challenge (Saturn) of leading there on an issue that is of crucial importance to women (Moon) at this time. It would seem Davis does not wish to live in a world where women are forced via top-down rules and regulations (Saturn) to become mothers (Moon) against their wills. This is not the Aquarian era she wishes to see, and it is not the Aquarian era I wish to see.

Davis is currently experiencing her Chiron return in Pisces, opposite Pluto in Virgo. She is fighting on one point (Virgo) that has far-reaching effects on the whole (Pisces).

Davis has a North Node in Cancer and a South Node in Capricorn, indicating that she has the talent, know-how, and work ethic to rise to prominence within the structures as they exist (Capricorn) but that she must inject soul, emotion, care, and femininity into those structures as she rises. She is not meant to follow along with the Old Boys Club. She is on a protective path, a caring path, and to reach full success and prominence, she must focus on areas that have been and are being neglected or straight-out attacked. She must act as a woman who cares.

Davis grew up working class, raised by a single mother in Texas. She started working at age 14 to help support her family and became a single mother herself at age 19. She worked her way up and earned a law degree with honours from Harvard Law School. Source.

This is one small victory in the slow, attempted stranglehold of conservative, male-dominated power during the Pluto in Capricorn transit. But Black Moon Lilith needs to be at the table every step of the way.

Watch for opportunities to bring the deep, dark, denied feminine perspective to the table in your own lives. Gather your courage, and plant your feet, just as Wendy Davis did. As you see, you may feel you are standing alone, but Black Moon Lilith individuals around the world are behind you every step of the way.

Black Moon Lilith in Cancer squares Uranus in Aries September 17, just before the Saturn-Venus-North Node conjunction at 8 degrees Scorpio.
Posted by Willow at 9:37 AM

Truly incredible, thank you for sharing.

Very inspiring post, Willow. Thanks for highlighting the force of BML as expressed through a very dynamic woman determined to shake up the patriarchal status quo on behalf of feminine values. Yoohoo!
Teresa

Add this to the list of changes: yesterday, the so-called "Defense of Marriage Act" (DOMA) was overturned by the US Supreme Court on the grounds it is unconstitutional to deny marriage benefits to same-sex couples.

And just so we know what we're facing here: Gov. Rick Perry had this to say about women who are speaking out for their right to choose:

Rick Perry: “The louder they scream, the more we know that we are getting something done.”

Disturbing, sadistic, pathological.....you be the judge. Perry is the Governor of Texas.

Anon 1:00 - Yes, Rick Perry is frightening. Total anti-abortion crusader. And that quote sums it up. Oozing with misogyny, isn't it?

Wow! Just wow! Thank you for this wonderful post. I just loved it. So proud to be a woman!!

Thank you Willow for the great article! Davis is an awesome woman, and the timing was Divine. This, is why I love astrology!

As for Rick Perry and other "Old Boys," they will continue to fight to impose their will, but it looks as if the aspects are in women's favour right now. Women will speak up and speak out! My BML and Chiron are both at 6 Aquarius, being squared by Saturn - and I fully support all women's efforts to be empowered and independent!

The more they scream...you know who thinks
Like this?

RAPISTS. He's such a smug bastard. Pro-life
my ass. TX just executed its 500th person in prison.
Wanna puke? It was a female inmate.

I don't think I can take much more.

Yes! A brave woman standing up to the ole' Texas redneck boys!

I found out from my father, 6 months before he died, that a great Aunt of mine ran an illegal abortion clinic in South Dakota back in the 20's and 30's. she was my grandmother's sister and came from a family of 13 kids. She never married and never had kids - no surprise. Proud to know I have those strong feminine genes in my background.

In response to the comment about Texas executions, here is the official list, complete with last statements. No other U.S. state had such an official presentation of the inmates they execute. Notice the disproportionate amount of blacks and Hispanics on the list. Anyone who has the time to read the last words of the convicted will notice a LOT used their final recorded words to make sane arguments about their innocence, some giving very in depth details about the inaccuracies that lead to their convictions. :(

Politicizing the defense of the murder of unborn children by whores too promiscuous and careless to prevent pregnancy... a new low... great work willow, your tribe would defend any outrage in the name of protecting your "rights" and "Freedom."

raveise, you're such a supreme douche.

--"rights" and "Freedom" for women are not absolute, they are determined and granted by the politicians who happen to be in office.

Even politicians who have accepted money to vote a certain way. But these politicians are not to be called 'whores' for this behavior. They are Texas Republican state senators, after all. (These people also lie and cheat, such as trying to change the time stamp on a vote, but that's ok, too. Even though it's a clear sign of the morally bankrupt.)

But I agree with ravenise on one point: Willow is doing a great job. The louder these scared and threatened ravers scream, the more we know that we're hitting our target in this fight for women's rights and freedom.

"The louder these scared and threatened ravers scream, the more we know that we're hitting our target in this fight for women's rights and freedom."

Agreed! Let's turn that statement on it's ass in honour of Mr. Perry.

Loved your blog on this women , wow an 11hrs standing up and talking. Love her passion. Thankyou again . Mary Rodgers.