The astrological configuration dominating the skies for the first third of 2013 is the Yod. Two very prominent Yod configurations are forming now and will be in effect into late April 2013.

These configurations are very strong at both the December 2012 solstice and the March 2013 equinox, with exact aspects forming at those times and transiting personal planets further activating the configurations.

Yods are configurations made up of three bodies forming two difficult quincunx aspects (150 degrees) and one supportive sextile (60 degrees). The aspect lines form a skinny triangle.

The first Yod forming now, Yod A, involves Saturn in Scorpio sextile Pluto in Capricorn as the base of the triangle with both bodies quincunx Jupiter in Gemini, which is the apex of the triangle. 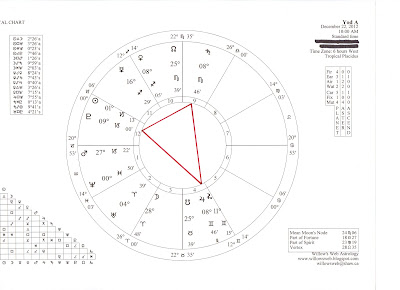 ﻿
The second Yod, Yod B, involves Uranus in Aries sextile Jupiter in Gemini as the base of the triangle with both bodies quincunx Saturn in Scorpio, which is the apex of the triangle. Yod B is somewhat loose currently but tightens around March equinox. 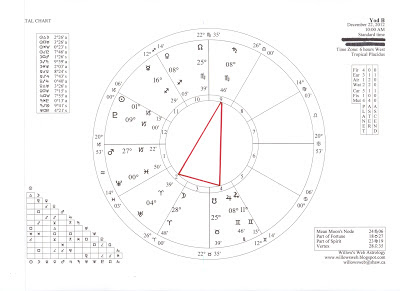 Complicated doesn't begin to describe the subtext these days.

The apex of a Yod - where it is pointing - is often referred to as the "finger of God." The body at the apex is generally considered the key to the successful navigation of the configuration.

Jupiter wants to make a big splash with a boisterous expenditure of energy while Saturn wants to stay firmly on the downlow, conserving every last iota. Each placement horrifies the other, to a certain extent.

In Yod A, the base of the Yod - the sextile between Saturn and Pluto - could create a real Debbie Downer effect. Though this is a supportive aspect, things can become too concentrated here, too serious, too severe, too dark. Things could get downright miserly. We could become too much of a closed circuit, finding ourselves in a state of deep, dark, 'cabin fever' stale. If we're too strongly confined by this Saturn-Pluto vortex, the relieving point becomes Jupiter in Gemini: Get some fresh air flowing. Get out there in the world. Talk to people. Enjoy yourself. Move around in your neighbourhood. Search for some new stimulation, some new ideas, some new conversations. Talk about mundane daily affairs. Keep things light. Find out what people are talking about. Discover a new interest.

On the other hand, in Yod B, the base of the Yod - the sextile between Uranus in Aries and Jupiter in Gemini - could create way too much stimulation. This one can put our brains on overdrive. New ideas could be bouncing around and popping in our heads like popcorn kernels heated by a lightning strike. Over-the-top excitement about the future and an overwhelming drive to move forward could be coursing through our systems, making wheels spin. If we're being charged up with too much Jupiter-Uranus energy, the relieving point then becomes Saturn in Scorpio: Slow down. Wait. Get your feet back on the ground. Get serious about everything that has to be resolved before you go bounding forward. Understand that your big ideas are going to take time to develop and that a lot of them will burn out before they even get off the ground. Adopt more of a "show me the money" stance before you go off half-cocked.

Yods aren't comfortable configurations, as they involve two quincunxes, which are probably the most awkward aspect in astrology.

Quincunxes involve two planets at a tricky 150-degree angle to each other. Most often the planets involved are in signs that could not be more different - they're of different elements, qualities, and genders. The expression and themes of each sign are truly alien to the other.

In this case, we have Yod A with Saturn in a fixed, feminine, water sign quincunx Jupiter in a mutable, masculine, air sign, which is also quincunx Pluto in a cardinal, feminine, earth sign.

In Yod B, we have Uranus in a cardinal, masculine, fire sign quincunx Saturn in a fixed, feminine, water sign, which is also quincunx Jupiter in a mutable, masculine, air sign.

You see the differences clearly.

Oppositions, in contrast, usually involve signs of the same quality (cardinal, fixed, or mutable) and gender (masculine or feminine).

Quincunx aspects are awkward, odd, and foreign, with many adjustments required to create any sort of workability at all. There is a sense of the alien and of anomie with quincunxes - nowhere to land, nowhere to call home - but they also hold the potential for major breakthroughs in understanding.

Imagine a conservative, working class, rural cowboy and an upper class, vegan, lesbian urbanite getting stuck in an elevator together. More than likely, they would come to understand each other a bit better from the close (yet highly awkward) contact. The quincunx is kind of like that.

The Yod (two quincunxes and a sextile) could be referred to as "The Breakfast Club" configuration. Brains, jocks, criminals, basket cases, princesses, principals, and janitors all mish-mashed together, making the best of it.

With benefic Jupiter so strongly involved in both Yods, breakthroughs in understanding are more possible than usual. The influence of Jupiter indicates these breakthroughs will often have a religious, faith, or belief-related tone. Different cultural beliefs and backgrounds can come into a workable harmony - not completely comfortable, but functional - as long as underlying issues and structural problems are recognized and addressed.

There's an emphasis on daily living, going about our business in neighborhoods and local societies, and the humourous, cross-cultural commonalities we find there.

If all else fails, make a wry social observation to which almost anyone could relate.

People who are foreign to each other in very fundamental ways can find the common ground and the common truth over the next few months in an almost miraculous way, but it's going to take effort and some skillful communication of highly variant perspectives.

Jupiter in Gemini teaches us that many different perspectives can be true at the same time with each perspective necessary in order to come up with the complete picture.

In order to be successful, we're going to have to put up with some awkward social angles - at work and at play - from now into late April 2013. Our inner landscapes, too, involve these awkward angles and conflicting pulls.

There's going to be some irritation, people. Some "teeth on tin foil" effects. Expect it. Work with it. But any honest effort we put toward creating a workable harmony brings blessings and a sense of cosmic grace to us and our social scenes.

Jupiter is currently conjunct the mean placement of Black Moon Lilith, activating the lunar apogee, and forms the exact conjunction at 10 degrees Gemini on December 11. This indicates that certain perspectives and conversations coming up now will be annoying, unsettling, disturbing, or socially volatile. Things are being aired and perspectives are coming to the table that have previously been invisible, denied, or downplayed. This particularly relates to the outsider female and/or feminine experience.

These are the tricky angles that are so very necessary now in order to come up with the full truth, the complete picture. But the Black Moon Lilith themes add to the Yod difficulties for people bringing those perspectives forth and for those who must receive them and then do something about it.

Though it is considered our major benefic planet, bringing gifts and grace, Jupiter is not loving life so very much in Gemini. From a previous post:

"Jupiter is in the sign of its detriment in Gemini, meaning it is not an easy or flowing placement for this planet. Jupiter does best in broad-minded, freedom-loving, philosophically-oriented Sagittarius, the polar opposite of chatty Gemini, which is more at home with news, daily conversation, and local neighbourhood goings-on.

There is a feeling of contraction and concentration with this placement - things Jupiter is not too keen on experiencing. Jupiter in Gemini is the wild and randy centaur, drunk on the heady experience of life, culture, and opulent living, forced into the confines of local society: hoofs clickety-clacking through crosswalks, standing in line at banks, ordering espresso at the local coffee shop rather than loping through magnificent wilderness around the globe."

Until then, say your piece when necessary, but don't let it all hang out conversationally. 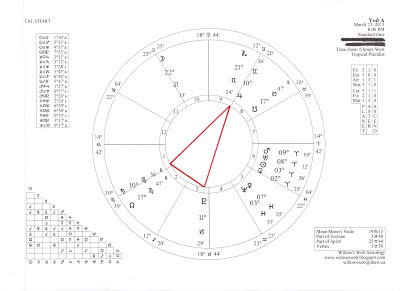 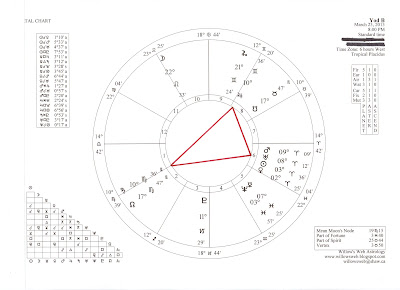 The Yod B coming around at the Spring Equinox give me good reason to get another reading - since it falls on my Solar Return...

Thanks Willow for explaining what and how a Yod works - I never had a more clearer explanation than yours.

too funny about the centaur running through geminian landscapes... :)

"Jupiter is currently conjunct the mean placement of Black Moon Lilith, activating the lunar apogee, and forms the exact conjunction at 10 degrees Gemini on December 11. This indicates that certain perspectives and conversations coming up now will be annoying, unsettling, disturbing, or socially volatile."

Nailed this, and it's rolled in early :). Hang onto your hats!

Yes, it's been in effect for a few weeks already! We're at the peak right about now.

This all makes sense to me now. I am a 54 yr old white heterosexual single (separated) woman in the design industry (just a little background so this makes sense) and I started a new job in April that has allowed me to cross paths with a lot of new people. I have made 4 very lovely friends, all male, 2 gay, 2 straight, 2 white, one black, one east Indian and three only 27 yrs old As I have contemplated the strangeness of my new associations, I have been feeling grateful to have such a diverse set of new people in my life and have taken such riches away from each of them that it almost seemed destined for some reason. They seem equally interested in sharing the details of their lives with me as I have with them. My life has been enriched and my perspective broadened to such a degree I expect they will always be a part of my life moving forward and it has also made me see how much more we are alike than we are different.

That's beautiful, Deb. Just running across this comment while re-publishing this article. I hope you are all still in touch now, almost 10 years later.