A Late Scorpio Full Moon: No War With Iran, and No War on Earth. Not Now, and Never Again. 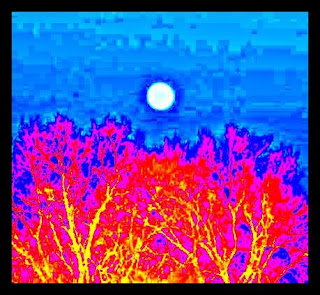 The Moon is full in Scorpio, the sign of its detriment. This is both an unsettled and an unsettling Moon. This is a Moon that sheds light on the darkest of intentions, on the dirtiest of allegiances, on the most hidden of motivations. This is a Moon-mother that prepares us for the trials up ahead. It doesn't sugarcoat things. It doesn't pretend or deny. It emotionally acclimatizes us to the darker elements of life on this Earth, helping us to get comfortable with even the most uncomfortable of emotional and psychological realities. It illuminates previously-hidden nuances, aiding our intuition as we feel around in the dark. This is a Moon-mother that comforts us with the understanding that we can get through even this, that people always have gotten through. This is the Moon of ancestors. They had the grit to make it through tough times, and so, of course, do we. This Moon provides validation on that point.

Under this Scorpio Full Moon, the psychopaths who call themselves our leaders are puffing themselves up and making themselves important via plans for a new and vicious war attack.

Uranus is the planet of the unexpected, you see. But with the past two Uranus ingresses have come the all-too-reliable unleashing of violence, death, misery, and destruction by the powers-that-be on the people.

With the change in signs of Uranus has come the roll-out of a new version of Hell on Earth:

Uranus enters Pisces in 2003. The horrific invasion of Iraq and mass slaughter of Iraquis (either quickly through direct attack or slowly through economic sanctions) under false pretenses.

Uranus enters Aries in 2011. The illegal bombing of Libya, murder of Libyans, and assassination of the country's leader. Simultaneously, the Fukushima nuclear disaster in Japan as covert nuclear warfare and the immediate murder of thousands of people with the tsunami.

Uranus enters Taurus in 2019. A well-publicized intent by the U.S. of A. to send 120,000 troops to the Middle East with Iran, in particular, in its sights. This is being called "reminiscent of the invasion of Iraq."


The Hell on Earth initiated by the power establishment at each Uranus ingress is experienced most acutely, of course, by whatever poor human beings find themselves in the geographical cross-hairs, living, through no fault of their own, on land pre-destined for the orchestrated horror, pain, and atrocity that benefit the ultra rich, sipping martinis in glass cages in the sky while the profits from their murder machine passively roll in.

This pre-planned, engineered, and orchestrated Hell on Earth is also felt oh-so-acutely by whatever country boys and inner city boys and working class gals were convinced that they were doing a good and honourable thing for their countries by enlisting. They don't yet see the full extent of it, the Hell on Earth that will be rolled out for many of them for the remainder of their days. The post-traumatic stress, the mental illness, the addictions, the impossibility of re-integrating into society, the poverty, the homelessness, the lifelong haunting by what they've seen and what they've done.

But this Hell on Earth does not begin and end with these direct targets, with these lambs being sacrificed without a second thought by the murder machine.

This Hell on Earth has a very long reach. It seeps into every farm, every town, every city, every household, every office building. It seeps into the special occasions and the regular, old days alike.

It seeps into every psyche.

And the epidemics of depression, anxiety, loneliness, and hopelessness deepen. The badness strengthens until even the hyper-scheduled and frantic pace of daily life can't bury it, can't deflect from it, can't create escape from it.

The Hell creeps in, seeps in, sets in, even though most cannot see the roots of it. They cannot see the toxic energetic state of this planet as directly affecting their own well-being in any way.

And I can write about all this, after so many years, in a matter-of-fact sort of way. I can lay out the astrology. I can back up my sentences with applicable research links. I can describe this new roll-out of Hell on Earth in simple, black-and-white words on a screen.

And maybe it even seems a little bloodless, how I foresee all this and then lay it out.

These are real, precious people who will be hurt while the elite celebrate their missile strikes with champagne. These are people who are loved. People who have families, communities, lives, hopes. People who have favourite foods and favourite music and favourite animals. People who tuck their sweet babies into bed at night. People who sip coffee or tea, who watch the sunrise or sunset, who laugh or cry. These are real people who are going to be hurt by psychopaths erroneously calling themselves our leaders, psychopaths who truly believe that the masses are less than they are, that precious human beings are nothing but collateral damage on their paths to obscene wealth and "greatness."

I know that it's real blood, real pain, real suffering, and I know it's being intentionally brought down by those who feel justified in setting this in motion for their own benefit, to settle their pathetic "pissing matches through the ages." As the bodies pile up, so do their profits. And so does their smug self-satisfaction. They see nothing wrong with this. To them, this is just. This is the natural way of things in their sick and twisted world. This is the way it's been planned all along. This is the way it has always been planned.

It doesn't really leave us. It just piles up. Because it's never fully acknowledged. It's never fully exposed. We never get to the real roots. We never uncover the full scope of depravity in the power establishment, swinging instead from Liberal to Conservative, from Democrat to Republican, without seeing how they all play the same vicious and anti-human game.

We are already at the brink of what our collective sanity level can manage. This planet can't take any more war. We've absorbed all we can absorb. To push forward in this way against Iran is madness, but it is, indeed, mad men and women at the helm, and we need to understand this in no uncertain terms.

It is globalist male dick-swinging combined with personal vendettas that are going to get people hurt and killed. These people are not our leaders, no matter what the political stripe. These people do not hold legitimate power over us. They do not tell the truth. They are not good people. They do not live good lives.

Under this Scorpio Full Moon, we're getting prepared for a reality that almost no sane, thinking, caring person wishes to experience.

We're getting comfortable with the ugliness under this Moon so that it doesn't take us by surprise.

We're getting comfortable with the ugliness under this Moon so that it doesn't take us down.

This knowing is power - a power they try mightily to sever us from.

But as this Moon grows full in Scorpio, we know with every fibre in us that we cannot actually be severed from this knowing, not for long, not without our permission.

We're soul-connected through time and space to every person who knew the real deal, who felt it and could not un-feel it, who saw it and could not un-see it. This is our comfort now. That we share this knowing and this seeing, even without speaking a word to each other.

We stand under this beautiful, glowing orb, bringing its heavy, unsettling, and most-valuable realizations, with our eyes wide open.

This level of seeing is why you are so very needed, willow.
i would that your audience were larger.
Not that that appeals to you, i know- but your insights need cast further.
there is an electric potential here that cannot ground
i wish i could do more. i wish it were different.
silly wishes

i hope you survive all of this bullshit.
They will need you.

It seems to be a karmic condition to stay small/under the radar. I have the audience it's safe for me to have, basically. With more popularity comes attention from the wolves, and I have already had enough run-ins with the wolves for one lifetime.

Considering my history of being plagiarized by "bigger names," I'm sure that's what would happen if I became more popular. I tried posting my articles on Reddit in the past, and not only did it waste a huge amount of time battling idiots in the comments sections, but I was plagiarized and also censored/blocked at that site. Not worth the emotional energy expenditure.

That said, it is very frustrating and does not seem fair when you see how the more superficial takes on astrology rise to the top of the popularity heap. It's also extremely difficult to continue this type of work without adequate financial support. The patrons definitely help, but it's still working at an energy deficit over a long period of time (11+ years now).

If this work is needed (and I believe it is), why is it almost impossible to do it?

It's a mystery! Oh, Earth. So damned mysterious, aren't you?

Just share the articles around, I guess. That's all you can do. :-)

Thanks for the nice feedback.

I accidentally deleted a real comment because in the early morning mind fog, I thought it was a spam comment.

I get at least 30 spam comments for every one real comment these days, and I'm sort of on auto-pilot with the rejections.

Sorry, commenter! If you comment again, I will publish it.

It was me.
Thank you for not sugar coating your analyses like many other astrologers have been doing.
My daughters are half Iranian and we are so worried about their extended family in Iran right now.
I will have the sat pluto conjunct on my birthday next year and am feeling a heavy sense of loss already.
Keep up. The good work. Love from the UK

I'm so sorry, AstroAng. I hope we can still stop this from happening.

Me too Willow. I have pallas conjunct my Sun natally at 23 cap so I am a spiritual warrior. Using the pluto power afforded to me at this time I call on the universe to stop this insanity. I hear American fathers are telling their sons to ignore the draft if they are called up. We need to follow suit. So many of my relatives ended up as cannon fodder in the Iran Iraq war. The planet can't take anymore of this.

No, it can't. No more war on Earth! It would be catastrophic in so many ways.

I'm very sorry about your relatives, Sun-Pallas Athene in Cap.

They're destroying us from so many angles.