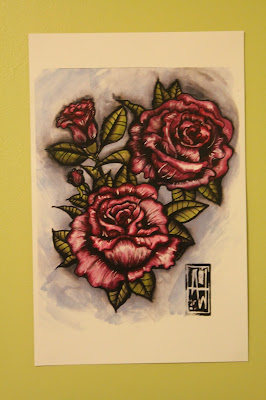 Bringing more beauty to this world and to my life!

I was part of an art market recently, and the brilliant awesomeness of Aryelle Attridge-Weeks from two tables away was near-blinding! Lucky for me, she is not as scared of other humans as I am (or she fakes it nicely). She suggested an art trade, and she also enjoys cow photos! Perfect. I'm delighted to have her gorgeous watercolour print on my wall. She worked previously as a tattoo apprentice and I love the combination of tattoo culture and fine art.

You can find more from artist, youth worker, social work student, and general fabulous human being, Aryelle Attridge-Weeks at her Instagram page. Prints are $25 each (CND) + shipping. Many to choose from. Contact info and email money transfers to:
littlemurdermaid@gmail.com


Yesterday was the eight-year anniversary of me being poisoned by the fluoroquinolone antibiotic Cipro. There's not a day that goes by that I do not experience some sort of pain, dysfunction, discomfort, or emotional/psychological horror directly caused by this drug.

I was mis-prescribed the terribly dangerous Ciprofloxacin in late 2009 for a very minor urinary tract infection and was never given any warning about the potential side effects, despite a Black Box Warning about tendon rupture that already existed on the drug. The Black Box Warnings did not trickle down to prescribing physicians, and most of the people describing the damage done to us by fluoroquinolone antibiotics have not been believed by the medical establishment.

In light of the current "dark truth-telling" themes with Mercury retrograde conjunct Saturn, Venus, Sun, and Black Moon Lilith in Sagittarius, I thought I would interject a little Black Moon-style truth into the following articles, pulled from mainstream media sites. (Bold All Caps, just to be uber punk rock/stereotypical internet activisty...heh)

"The Fascists Got Me With Fluoride Pills" would make a good folk-punk song...

From a July 26, 2016 article by Maggie Fox, "FDA Strengthens Warning on Powerful Antibiotics":

"The Food and Drug Administration strengthened the warnings about one type of antibiotic Tuesday, saying they’re too strong (STRONG = "POTENTIALLY DEADLY OR PERMANENTLY DEBILITATING") to be used for sinus infections, bronchitis and simple urinary tract infections.

(EXCEPT HOW MANY PEOPLE HAVE BEEN PERMANENTLY DAMAGED, DEBILITATED, OR DISABLED EVEN SINCE THIS ARTICLE WAS WRITTEN BECAUSE FLUOROQUINOLONE ANTIBIOTICS WERE PRESCRIBED AND DISPENSED AS JUST THAT - FIRST LINE ANTIBIOTICS FOR MINOR INFECTIONS? THEY'VE BEEN PRESCRIBED AND DISPENSED LIKE THIS FOR DECADES NOW WITH DOCTORS DENYING OUR STORIES ABOUT THE DEBILITATION. THIS DAMAGE WAS KNOWN ABOUT FOR DECADES, AND THE MEDICAL ESTABLISHMENT KEPT DOLING THESE DRUGS OUT WITHOUT WARNING!)


The drugs are in a class called fluoroquinolones and include levofloxacin (as known as Levaquin) and ciprofloxacin (Cipro). They can cause serious and sometimes permanent side-effects. (A LAUNDRY LIST OF MORE THAN 50 SYMPTOMS, SOME EXTREME/TERRIFYING, MANY LIFE-THREATENING. THE DAMAGE CAUSED BY THESE DRUGS WILL SHORTEN THE LIVES OF MANY OF THEIR VICTIMS.)

“While these drugs are effective in treating serious bacterial infections, an FDA safety review found that both oral and injectable fluoroquinolones are associated with disabling side effects involving tendons, muscles, joints, nerves and the central nervous system,” the agency said in a statement.

“These side effects can occur hours to weeks after exposure to fluoroquinolones and may potentially be permanent.”

The drugs are worthwhile to use for potentially fatal infections such as plague, anthrax and some types of bacterial pneumonia but not for the more minor stuff, FDA added.

(WHICH IS EXACTLY THE ORIGINAL PURPOSE FOR WHICH EX-NAZI BAYER CORPORATION MANUFACTURED CIPRO - WARDING OFF ANTHRAX ATTACKS IN SOLDIERS! THESE ARE MILITARY GRADE ANTIBIOTICS. BAYER, JOHNSON&JOHNSON, AND OTHER PHARMACEUTICALS CORPORATIONS MADE FAT STACKS OF CASH BY PASSING THEM OFF AS SUITABLE FOR MINOR INFECTIONS, KNOWINGLY KILLING AND INJURING PEOPLE FOR DECADES WITH UNNECESSARY PRESCRIPTIONS OF THEIR DRUGS.)

“The labeling changes include an updated Boxed Warning and revisions to the Warnings and Precautions section of the label about the risk of disabling and potentially irreversible adverse reactions that can occur together.”"

(THERE WERE ALREADY TWO BLACK BOX WARNINGS ON CIPRO, EVEN AS THEY CONTINUED TO BE DOLED OUT LIBERALLY BY THE MEDICAL ESTABLISHMENT. I WAS NEVER WARNED ABOUT THESE SIDE EFFECTS WHEN I WAS GIVEN CIPRO (A COMMON STORY), DESPITE THE FACT THAT A BLACK BOX WARNING ABOUT TENDON RUPTURE WAS ALREADY ON THE DRUG. THE SECOND BLACK BOX WARNING IS ABOUT PERIPHERAL NEUROPATHY, A STATE OF NERVE INFLAMMATION AND CONSTANT PAIN CAUSED BY THE DRUG, SOMETIMES PERMANENT. REGARDLESS OF THESE HORRIFYING BLACK BOX WARNINGS, THESE DRUGS WERE HANDED OUT LIKE CHICKLETS AND MORE THAN LIKELY STILL ARE, DESPITE THE "STRENGTHENED WARNINGS." PEOPLE HAVE BEEN SCREAMING ABOUT THESE SYMPTOMS, ABOUT THIS PHARMACEUTICALS POISONING, FOR DECADES. OF COURSE BAYER WAS AWARE OF IT. JOHNSON&JOHNSON WAS AWARE OF IT. THEY JUST DIDN'T CARE BECAUSE CARING CUTS INTO THE PROFIT MARGIN. $$$$$$)

The action by Health Canada follows safety communications by the U.S. Food and Drug Administration advising health care professionals to only use antibiotics such as Cipro, Avelox and Levaquin as a last resort because the risks may outweigh the benefits.

(SO HEALTH CANADA ADDED THESE WARNINGS ONLY AFTER THE FOOD AND DRUG ADMINISTRATION DID SO IN THE UNITED STATES. THIS SHOWS THE LOCK-STEP GLOBAL PHARMACEUTICALS CARTEL IN ACTION. NO COUNTRY DARE CREATE RULES, LIMITATIONS, OR LAWS AGAINST A PHARMACEUTICAL UNLESS IT IS TOLD TO, TOP-DOWN. OF COURSE HEALTH CANADA WAS AWARE OF THIS PROBLEM YEARS OR EVEN DECADES BEFORE THESE WARNINGS WERE ADDED.)

A Summary Safety Review published by Health Canada on Jan 23 identified reports of persistent and disabling side effects. These side effects include tendonitis/tendinopathy, peripheral neuropathy and central nervous system disorders.

In addition to these side effects, Health Canada reviewed reports of known side effects linked to fluoroquinolones, such as:
The Canadian agency said it would continue to monitor the safety of these drugs. (THESE DRUGS ARE NOT SAFE IN ANY WAY, SHAPE, OR FORM UNLESS IT IS A LIFE-AND-DEATH SITUATION, AND EVEN THEN, TAKING THEM SHOULD BE CONSIDERED CAREFULLY.) It is currently working with the Drug Safety and Effectiveness Network (DSEN) and the Canadian Agency for Drugs and Technologies in Health (CADTH) to conduct additional studies.

“Health Canada recommended that the safety information for all fluoroquinolone products be updated to include information about this rare but serious risk,” the agency said in its Summary Safety Review.

(SEVERE DAMAGE DONE TO MILLIONS OF PEOPLE WORLDWIDE IS NOT "RARE." BUT THIS IS THE TYPE OF BRAINWASHING USED BY THE CURRENT SCIENTIFIC PARADIGM - IF IT HAPPENS TO ONLY 1% OR 2% OF PEOPLE, IT'S CONSIDERED NO BIG DEAL, AN ANOMALY. BELIEVE ME - IF YOU OR SOMEONE YOU LOVE IS IN THE 1 OR 2%, IT IS FAR TOO GREAT A RISK TO TAKE WHEN MUCH SAFER ANTIBIOTICS COULD AND SHOULD BE PRESCRIBED. WHEN YOU'RE DOLING THIS STUFF OUT TO LITERALLY BILLIONS OF PEOPLE WORLDWIDE OVER THE COURSE OF DECADES...1 OR 2 % ADDS UP QUICKLY.)

“Health Canada is working with manufacturers to update the safety information of all systemic (taken by mouth or by injection) fluoroquinolone products marketed in Canada.”

About 26 million Americans take a fluoroquinolone antibiotic each year. Because they treat a wide variety of infections from sinus infections to anthrax, prescriptions skyrocketed over the past several years.

The Centers for Disease Control and Prevention estimates doctors write about half the prescriptions in the U.S. for viral conditions such as the flu or a cold, the Washington Post reported. These illnesses do not respond to antibiotics. (PHARMACEUTICALS-DRIVEN MEDICINE - A TERRIFYING, INSANE, AND INEFFECTIVE THING)

In July 2016, the FDA approved drug label changes to warn of “disabling and potentially permanent side effects and to limit their use in patients with less serious bacterial infections.”

According to the FDA, the disabling side effects involve “tendons, muscles, joints, nerves and the central nervous system.” The agency warns “these side effects can occur hours to weeks after exposure to fluoroquinolones and may potentially be permanent.”

(ACTUALLY, NO, THEY CAN OCCUR YEARS AFTER EXPOSURE TO FLUOROQUINOLONES. PEOPLE CAN ALSO USE FLUOROQUINOLONES WITH NO REACTION FOR MANY YEARS BEFORE AN ADVERSE REACTION IS EXPERIENCED. THE CUMULATIVE EFFECT OFTEN WORSENS THE REACTION.)

The latest studies on fluoroquinolones link them to dangerous aortic aneurysms (ruptures) and aortic dissections (tears). Researchers suspect the drugs break down the body’s collagen, a substance that makes up tendons and the lining of the aorta.

Thousands of Adverse Events and Lawsuits

RxISK.org, an independent site run by researchers, combed the FDA’s data over the course of 10 years. It found 80,000 adverse drug reactions possibly associated with Levaquin and generic levofloxacin, including 1,000 deaths. For Cipro and generic ciprofloxacin, the total was 79,000 adverse events including 1,700 deaths.

(CONSIDERING THAT ONLY AN ESTIMATED 10% OF ALL ADVERSE DRUG REACTIONS ARE REPORTED TO AUTHORITIES, AND THESE STATISTICS ARE FOR THE UNITED STATES ALONE, TENS OF THOUSANDS OF DEATHS AND MILLIONS OF ADVERSE REACTIONS - MANY PERMANENT - HAVE BEEN CAUSED WORLDWIDE BY THE MANY DIFFERENT BRAND NAMES OF FLUOROQUINOLONE ANTIBIOTICS.)

Thousands of patients document their fluoroquinolone injuries across the internet on patient forums. Some filed lawsuits, claiming drugmakers failed to warn about serious side effects.

At one time, Johnson&johnson faced several thousand lawsuits over Levaquin. Some are still pending before Judge John R. Tunheim in Minnesota. A separate multidistrict litigation for other fluoroquinolones — also before Judge Tunheim — currently has more than 700 lawsuits.

(THE BLACK MOON LILITH IN SAGITTARIUS MORAL OF THE STORY: WHETHER THESE CORPORATIONS/GOVERNMENTAL REGULATORY BODIES REALLY ARE DRIVEN STRICTLY BY MONEY AND GREED, OR WHETHER THIS IS PART OF AN INTENTIONAL DEPOPULATION SCHEME, THE PHARMACEUTICALS-DRIVEN MEDICAL ESTABLISHMENT HAS GONE PLUMB INSANE.)

All WWA "Cipro is Evil" articles