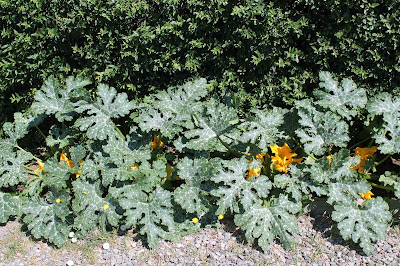 Zucchini plants getting ready to produce in the hedge garden


This 6,800+-word document is an astrological overview of the three-year Saturn in Capricorn transit and is being released under the Full Moon in Capricorn (exact tomorrow night). It is available to Willow's Web Astrology patrons, or it can be purchased by email money transfer or through PayPal for $11.25.

Included in the article:

- detailed interpretation of the three-year transit of Saturn through Capricorn

This will be my major offering for the transit.

Remember: you can become a WWA patron for as little as $35 Canadian per year, and you will receive the current patron article, as well as all other patron articles for the following year (or as long as your patronage is up-to-date).

We are currently moving to a Full Moon at 17 degrees Capricorn (exact at 9:07 p.m. PDT on July 8), tightly conjunct Lord of the Underworld Pluto Rx at 18 degrees.

Issues of institutional power, control, and violence (Pluto in Capricorn) in relation to the public (Moon) are coming to a head.

This includes overt physical violence, but it also includes more hidden and insidious (Pluto) forms, including the intentional economic violence being brought down that is hurting and killing people en masse on Planet Earth.

The G20 Summit - the closed-door meeting of the facade leaders of the wealthiest countries on the planet - is occurring in Hamburg, Germany this weekend (July 7 - 8), just as the Moon reaches its peak, conjunct Pluto.

It's very doubtful that this is a coincidence.

The G20 Summit held June 26 - 27, 2010 in and around Toronto, Canada was also planned to coincide with a Capricorn Full Moon conjunct Pluto. That particular Plutonic Full Moon was a partial lunar eclipse, falling within a remarkably potent cardinal t-square (Jupiter-Uranus in Aries, Sun-Mercury-Juno-South Node in Cancer, Moon-Pluto-North Node in Capricorn). Saturn in late Virgo made the blisteringly powerful formation a Grand Cross. From March 23, 2010, "Summer 2010 Eclipse Season: G8, G20 and Martial Law A-Plenty."

In the days preceding the meetings, there was both an earthquake (extremely rare) and a tornado that hit close to the lake country where the Global Governors were staying at the time. From June 24, 2010, "Cardinal T-Square Eclipse: Dicey at Best." This indicated some geoengineering hijinx, as well.

The astrological framework laid out in the patron article is, without doubt, being tapped and utilized by the current powers-that-be. (And I would certainly hate to carry the soulmark of being a hired astrologer helping these yahoos to plot their vicious schemes...)

The epic police-state force of 20,000 officers - all with various weapons at their disposal - has been unleashed on the estimated 100,000 protesters in Germany. The police set a highly aggressive tone right off the jump, unloading a water cannon on a peaceful dance party on July 5, injuring five people. Water cannons may sound fairly innocuous. They aren't. They can severely injure people, picking them up and throwing them many feet. They can also put people's eyes out and have in the past.

They are trying to normalize these headlines: "Police Use Water Cannon to Break Up Protest."

But this should never become normal to us.

In the days following, it has been reported that 160 police officers have been injured in clashes with protesters. I'm certainly very sorry to hear this, and I truly hate to see anyone being injured. But I do have to ask: how many protesters have been injured by police? Why are those numbers not as important to report in mainstream media channels? And how many of these "clashes" could have been avoided with less aggressive policing tactics/stances?

Remember, at this moment, it is still legal to assemble and protest.

The focus continues to be on "Black Bloc" protesters, who generally have an agenda to create property damage, not human injuries.

These groups often throw bottles and stones to try to drive police out of the area of the protests. (Generally, police are in full riot gear with shields and are protected from this barrage.)

It is also well-known that police forces embed agents provocateur into protests and into groups like the Black Bloc in order to incite more violence and illegal acts. An instance where police were caught red-handed on this front occurred in Montebello, Quebec in 2007. Police officer agents provocateur implanted to stir the shit were captured on video by legitimate protesters at the Security and Prosperity Partnership (SPP) meetings involving Stephen Harper, George Bush, and Felipe Calderon. The agents provocateur were picking up rocks and being aggressive. They were called out by protesters and then dove into the police line. At that point, it was visible that the aggressive "protesters" are wearing police boots - the same boots worn by the police officers. The Quebec police even admitted to the incident.

If you have ever been to one of these protests, you would know that only a small percentage of protesters are non-peaceful, and again, most of that non-peaceful element is intent on a display of anti-capitalist property damage, not human injury.

But because of the aggressive tactics of the Black Bloc (some of whom are undoubtedly plants), the media is now able to paint all protesters - all 100,000 of them - as potentially armed thugs, which then justifies excessive police force and brutality against protesters in the minds of the public.

"Well, if they weren't doing anything wrong, they wouldn't get sprayed/gassed/injured/locked up."

This is very dangerous (and false) thinking, but it is the type of thinking being manufactured in the minds of the public by the current media narrative.

I can provide a firsthand account that peaceful protesters who are doing nothing wrong are gassed, pepper sprayed, and sprayed with water cannons for no legitimate reason. This has become a regular occurrence. And again, this has become a normalized thing in the minds of many, and that sets a very dangerous stage.

These major summit protests have been going on since the 90s, but there has been an inching forward in the increase of force and weaponry used by police each year.

I've written about this in previous articles, including this one from the G20 protests in Toronto, Ontario, Canada in 2010:

I've also written about the escalation of weaponry - including energy weapons - being brought in to use against (predominantly peaceful) protesters:

From August 25, 2014, "The Age of Aquarius: a New Era of Energy Weaponry Used Against the People."

All Willow's Web Astrology G20 articles can be found here.

Suffice it to say, this Full Moon in the sign of its detriment conjunct laying-shit-bare Pluto is not exactly sugar and spice and all things nice. But its energy can certainly be used to position ourselves successfully from a strategic perspective, bringing us into control of our emotional and psychological domains.

Stay safe, friends. But don't turn a blind eye to the unjustified violence being brought down upon us during these times. This is both overt physical violence and insidious economic and money-related violence. There are very good reasons for the 100,000 people protesting in the streets of Hamburg right now. They represent hundreds of millions more voices of dissent, opposed to the violent and inhumane schemes being orchestrated from behind those closed doors.
Posted by Willow at 10:55 AM

Hi willow I have personally 3 federal lawsuits against involving the police here in the state of Florida. Since Pluto rules the highest or the lowest the many many criminal activity of people in authority will come out Saturn will force it out. That's just one thing I like about Saturn. Unfortunately it will not apply to all and every states in the USA there always be criminals working both sides and playing a catch me if you can games.my worst fear about having this president is morals and ethics of those who continue to believe to do the Wright thing I began to fear that on most different levels there are people out there simply not interested in the truth because money and profit is more important than anything else. With this president I feel like swinging between what is real and what is nightmare the fear of collective morality will dipp to unimaginable I simply can not bear until this president came along I don't remember when I felt so paralyzed I never felt paralyzed in my life thanks to my Mars in Leo but thinking about the long term consequences what just happened on jan.20th I am afraid it will not be good enough even after he nolonger holds onto that title collective damage has been done.

Willow, please watch David Icke's video "What Can We Do?" on YouTube. He explains the correct response for dealing with the Cabal.

No, thanks. Not a David Icke fan.

I'm already living my own "correct response" to it...

I'm not interested in paternalism or follow-the-leader, and I'm not certain Icke is entirely legit.

David Icke is an agent provocateur, imbedded in the collective to pretend he is ok. He is awful.

Good answer willow I personally do not like YouTube Google and Facebook is working together for globalization purposes. The last time I checked they are 2 separate companies on nasdaq. The multi billionaire mainstream media is in a transition to an all online platform and Google with Google fiber and 5g wants domination. Mark Zuckerberg is a dual citizen his 2nd citizenship issue Chinese or Hong Kong he is using his children birth right for the citizenship and bill Gates Google and Facebook are all working together behind the scenes disgusting. Bill Gates looks sick he looks like he have diabetes. The 3 of them wants to connect in a triangular shape north America Europe and Asia it's ridiculous.