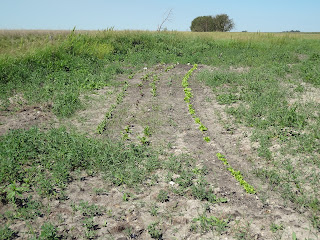 
But if you haven’t noticed, we’re working with far from the ideal here, people.

Tip #1: If the only available spot for your organic vegetable garden is, in actuality, down a prairie trail within sight of a pumpjack and oil flare, amuse yourself with the irony of the situation. As a useful philosophical exercise, spend time contemplating the symbolism involved as it relates to the state of today’s unsustainable, oil-dependent agriculture. 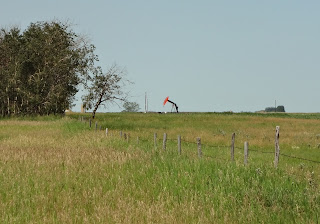 Tip #2: The concern may cross your mind that chemical spray drift from neighbouring fields could find its way onto your organic produce, but again, a make-do situation on Planet Earth is a make-do situation on Planet Earth. Try to suck it up. Under the intensity of the Uranus in Aries – Pluto in Capricorn squares, there’s really no pretending. We're doing the best we can, and the planting of an organic vegetable garden under such conditions is a true attempt at survival between the cracks.
Tip #3: Most gardeners will use a motorized garden tiller specially designed to work the soil of their garden spot in preparation for planting. If you don’t have access to such a machine, a disker hooked to a full-size tractor will work in a pinch. If you know or are related to a farmer or rancher who can assist on this front, you're in business.
Tip #4: If you find you don’t have a hoe because you left it at an aborted strawberry picking job years ago, just dig your row with the edge of a spade.

Tip #5: Usually, gardeners will use a string tied to two stakes stuck in the ground to ensure their rows are made in straight lines. If you are a DIY freestyle variety of gardener, though, and don’t have string or stakes or really even the inclination to use them, you can dispose of this step as a finicky aesthetic quibble.

Tip #6: If you find you have a surplus of seeds after you’ve planted your row, just add a bit of length to the end with the trusty spade. This will obviously create rows of differing lengths, but diversity makes the world go round, right?


Tip #7: If your garden stubbornly refuses to come up, resulting in a (premature) declaration of its failure by those who observe it, comfort yourself with the Plutonic principle that spontaneous, against-all-odds growth is not only possible but probable. This is a Plutonic punk DIY freestyle garden, after all. There’s no counting it out early. The phoenix shall rise. 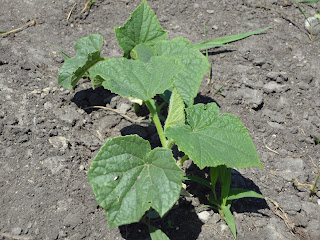 Tip #8: Due to multiple factors, you may find that not all your garden comes up. In fact, only two of your ten potato plants may come up due to the use of regular, rather than seed potatoes. Again, as a DIY freestyle gardener, accept that improvisation sometimes comes with drawbacks. As a true Plutonic punk gardener, however, immediately shed concern about or attachment to the dead zones, focusing only on what has survived. Applaud the survival of the plants that have showed themselves, growing under these inhospitable Uranus square Pluto conditions. Love and tend to the plants that have courageously burst forth, and think of the meals you will enjoy.
Tip #9: People will generally maintain a weed-free garden patch, but when your garden has been disked with a full-size disker and tractor, you are going to end up with a lot more ground than you need. Keeping weeds at bay will mean removing them from your rows and from the surrounding area, but leaving a perimeter of weeds to do their thing. The weed patch will, of course, be much more green, full, and lush than anything you planted, but just ignore this taunting from the natural world. 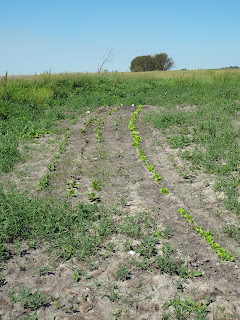 
It’s true that these crooked, raggedy-ass rows of arbitrary length and spotty growth would scandalize the old folks. They would continue to scandalize anyone with more usual ideas about gardening. Luckily, this garden spot is out in the country, down a prairie trail no one uses, hidden by a jungle-like patch of weeds around its perimeter and will escape most notice and critique. ﻿ 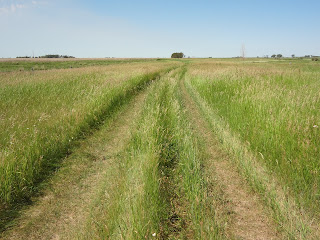 Hidden down a prairie trail

Under the attempted corporate, agribusiness monopoly by genetically modified and chemically-treated seeds and food, growing and eating organic or non-GMO is a revolutionary act.
If you do not have the space, the time, or the inclination to do your own DIY freestyle gardening, please visit your local farmers market and load up for the year.


Many vegetables – spinach, chard, beets, beet greens, kale – can be quickly blanched and frozen and will keep all year round. Having local garden produce at your disposal through the winter months is a wonderful thing. 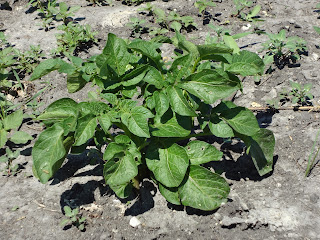 Ceres in Gemini: Information and Disinformation about Genetically Modified Seeds
Dwarf planet Ceres (grains, cereals, and the fertility of the Earth) entered Gemini (media) June 24 where it will stay until September 26. It will retrograde back into Gemini December 4 until April 25, 2013.

Issues related to food and agriculture are going to be talked about, thought about, and covered in the media during this time, and there will be ongoing releases of information designed to sway public perspective.

The push for the widespread introduction of genetically modified alfalfa is on, with multiple GM corporations trying to get in on the game, but the introduction of GM alfalfa would be devastating for the organics industry and for all non-GMO crops and livestock.

- All WWA articles on GM alfalfa

Willow, I'm proud of what your raw and natural garden can do. I like it the way it is, and the prairie trail, and the privacy(no one telling you how to run your show). And I'm proud as well of your mentioning the phoenix rising-- BADASS, I needed to read that!-- since some *cough* people criticize Pluto/Scorpio energy ad nauseam.

Yes, misused Pluto energy isn't pleasant but what misused energy is? Pick a planet, I'm sure we can come up with how f*cked up it can be, too.

Plutonians can certainly rise from the ashes. Some have a number of times, making certain other experiences much easier to deal with. Also, they can turn shit into a palace.

Hope your garden kicks ass. (And, yup, I support farmers markets-- this is one thing the town I live in is good at!)

Thanks for your wisdom.

Love your raggedy ass garden and your campaign against GMOs.

If you have any horsetail (prêle) to hand this makes a good mulch, as does flax (linseed) straw - doesn't get slimy and the slugs don't like it.

We mulch all our lines of carrots, beet, maize, etc etc and it works fine. Keeps moiture, creates a balanced 'ecosystem' around the plant, keeps down weeds...

Seaweed and nettles and miso help the body get rid of unwanted poisons, and eating a cup of cooked beans (dried) at least 5 times a week is as effective as chemotherapy over time, and helps cells regenerate. Ginseng whenever the body or soul is stretched to the limit, you can take it until it gives you a sort of caffeine rush. Lots and lots of greens.

Susun Weed writes well about all these things. Cut out dairy and dairy meat for breast cancer too (jane plant - your life is in your hands)

some of those garden weeds may be more nutritious than anything you planted. look now for Lambs Quarters (use like spinach, cooked or raw) and Purslane for your salads. In fall or spring (my favorite) Chickweed(stellaria media - has the shiny leaf)is also a salad sprout but also makes the most divine pesto (olive oil, lots of garlic - very yummy with rice crackers) enjoy!

Oh, yeah, I get that weeds are often valuable plants, but I don't know what is what and would more than likely make myself sick if I started eating random weeds.

I'm not writing this post to show off my gardening skills - more to be humourous about my lack of them!

Chard, beet greens, and spinach are staples for me, and I can't get them fresh around here very easily, so I decided to grow my own along with a few other veggies. That's about the extent of it.

And Deb - Agreed. Scorpio and Pluto are definitely a couple of the most pissed on and misunderstood entities in astrology - probably the most misunderstood, even by the majority of astrologers, as far as I can see.

Some of the advice handed out is actually detrimental to Scorpionic/Plutonic types because it's given from a person on the outside looking in who does not fully understand the dynamics at play.

Saturn in Scorpio is going to be quite the transit for most people. I notice people getting panicky about it already.

And yeah, every sign and every planet has a "dark side," but as part of the Scorpio trip, it gets pigeonholed and projected onto on that front.

Great to read this. Just started up my first ever vegetable patch in our little backyard in a big big city this past spring with some success: can see baby green tomatoes, already been eating radish (delicious despite leaves being ravaged by slugs), carrots and beetroot have leaves on, as do the potatoes and garlic. Onions didn't take though and pumpkin doesn't look like it will.

It's our way of keeping that connection with the real world and the soil and the plants in the midst of big city craziness.

As for the upcoming Saturn in Scorp: just read yesterday "if you can't get out of it, get into it". I wont be able to get out of it, so bring it on I say!

Sounds like a success! Enjoy the fruits (veggies) of your labour, Cloudy.

I did a couple hours of weeding and harvesting today. Lots of lettuce. The chard is coming really well. Spinach and beets are solid. Lots of carrots coming. I've had enough chard and spinach to eat plus blanch and freeze, so I'm happy.

My basil didn't come up at all. Broccoli is spotty - I have a few plants with leaves but nothing that looks like a broccoli bunch starting so far.

Two out of ten potato plants (as mentioned). Maybe about 10 cucumber plants grew. They're getting bigger but no flowers yet. Still...can't wait for cucumber slices in vinegar!

I have three cherry tomato plants in planters, and they have green tomatoes on, too.

Oh, man. We're doing gardening talk! So this is what it's like.

Pssssht. Willow, you should see *my* raggedy-ass garden, what with the crabgrass growing every-fuckin-where and the wilt getting two of my tomatoes and one of the pepper plants struggling for light beneath the Delicata Squash Plant That Ate Manhattan. And I've done this before! ;)

Aw, thanks for the update on your raggedy ass garden, Lilith! Sounds like my kind of place.