Last Day of Taurus and the Behaviour of Bovines 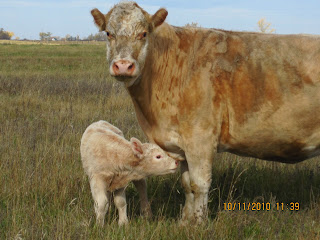 Today is the last day of Taurus season with the Sun on the 29th (anaretic) degree, and we have a massive amount of Taurus energy in our zodiac. The Sun, Jupiter, Mercury, Ceres, Black Moon Lilith, Vesta, and the Moon are all currently in the fixed sign of the bull, though the emphasis starts breaking up a little tomorrow evening with the Gemini New Moon.

I've been a ranch helper for the past few weeks, and you can't really get much more Taurean than that type of work. It's life on the land, on prairie grassland. It's physical work. It's animals and plants and dirt, wind and rain, sweat and sun. The work unfolds according to natural timing, according to the seasons, and it follows a similar course every year. Farmers and ranchers are time keepers in this way. They work according to old, nature-based rhythms and keep those fundamental energetic patterns anchored, just as the animals themselves do. When the Sun goes up, it's time to work. When it goes down, the work day's done. Simple.

It's coming to the end of calving season now, and the babes are running around all over the place. Watching cattle always reminds me of how much you can understand about the sign and energy of Taurus through the behaviour of bovines. 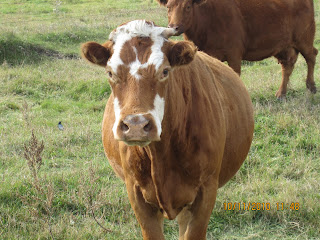 Understanding The Sign of Taurus Through the Characteristics of Cows

1) Taurus is a fixed sign, and cows have a fixed nature. They really don't like to move all that much, especially if they've just had a calf. Cows don't enjoy transition. They like their basic routines, and they're not fans of any upheaval or changes in those routines.

2) Cows are comfort seekers, just like Taurus. Once they're content, they like to stay put, enjoying the sunshine, grazing, and chewing their cuds. The only time they can be convinced to favour a change is if an option opens that brings them even more comfort. This generally involves more or better food - another Taurus favourite.

This is the transition going on right now. Every year, most of the cow-calf pairs along with steers and heifers are rounded up and trucked to a Native-run community pasture for the spring and summer. Once there, they have all the space and grass they could ever desire, but in order to get there, they have to endure the transition. They have to be moved from pasture to pasture at home and then up to the corrals to be worked before being trucked to the new pasture, and this definitely ruffles them a bit. Again, though, if the reward is there, they'll endure - just like Taurus.

To move the cow-calf pairs, my Dad rides horseback, and my mother and I (never horsewomen) each drive a vehicle through the bumpy-ass pastures in a mini round-up. My sweet ride is the 1986 Chevy farm truck. Just as if we were on horseback, we spread out and herd the cattle. Trying to determine how best to get cattle moving in the right direction gives us helpful hints for interacting with people with a lot of Taurus!


3) Cows, like Taurus, don't like to be rushed. They like to do things slowly, gradually, on their own timing. When they do move, they like it to be related to securing basic resources - food, water, shade, shelter from wind, or a comfortable place to lie down.

4) You can't pressure them too much. Cows will take some gentle guidance, but press too much, at the wrong place, or too quickly, and they won't do what you want them to do. If they feel excessively pressured, they'll rebel or freak out. They can be remarkably stubborn once they've been riled and will even jump a fence to get away. If an entire herd has been spooked in this way, they'll run through a barbed-wire fence. Suffice it to say, it's best to take it nice and easy on both bovines and Taureans, givng them lots of time and adequate space to make their moves.

5) Cows, like Taurus, enjoy working with a boundary. The easiest way to move cattle is by gently pushing them along a fence line to an open gate. Taking them through the middle of the open prairie is more likely to create confusion and panic. Boundaries and limitations can help them feel safe. 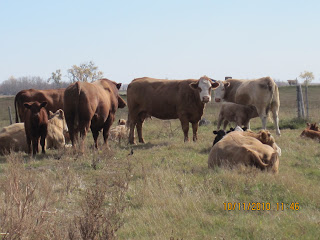 7) Cows pretty much do what the rest of the pack is doing. This is the traditional aspect of Taurus. Once in a while, there will be a renegade cow who busts out on her own, but usually, they like to do what the other cows are doing, as long as it makes good, practical cow sense.

8) They seem very docile and gentle, and generally are, but cows can become very pissed off - and dangerous - if they feel threatened in any way. Like most animals, cows are very protective of their babies.

9) Just like Taurus, after a transition or upheaval, they need time on their own to settle down and get back to a state of calm contentment. Once the pressure is removed, it doesn't take them long to get back to a settled state.

Use these helpful insights into the ways of the bovine to keep the Taureans in your life (and the Taurus in your own chart) sweet, calm, contented, and moving in the right direction!

K-MOOOOOOOOO! I was chatting with Matt Savinar this past Thursday on his community radio show Ask the Astrologer on KOWS FM out of Occidental, California. You can check it out at Matt's site, North Bay Astrology.
Posted by Willow at 3:46 PM

I don't know what it is, but there are way more woodticks than usual this year. Yuccckkk!

CAn't wait till you do Crabs (Cancer) and or Rams (Aries).

Must see video of bovines dancing - yes *dancing* - after being released from their winter housing:

Oh soooo curious about the "renegade" cows you speak of.

Willow, I was laughing (can't think of any Taurus who'd disagree with your observations) up until I read your comment about the woodticks. Yeah, I saw some of those suckers over the past couple of days while out in the woods, and they're fierce! And gross. Anyway, they have no shame.

I've a story for you that my younger brother titled "Bovine Intervention" when he'd heard it a few years ago. It has to do with my in-laws, and how they were driving happily and mindlessly on a long road somewhere in Washington state in the late '70s while expecting my husband (then a little bundle in his mother's womb). Apparently they were going over what felt like a hill, and when they rolled down there were several cows right in front of them, in the middle of the road. Maybe holding a cow conference or something.

It was too late to hit the brakes. Besides, my father-in-law freaked and just kinda started hoping and praying in silence for a miracle. The car kept going and through sheer luck they were able to weave through the herd without hitting any cows or injuring/killing any humans.

(P.S. But they're still really cute!)

BTW, I'm wondering whether you can comment on this: a friend recently mentioned that he always suffers when Sun is in Taurus because he has a whack of planets (he said "stellium") in Scorpio (and his Chiron's in Taurus)!

Is that a general observation that can be made, that when a house is particularly weak/packed/pressured/busy and we're in the opposite sign, it gets triggered?

I just have to say Willow, that since I stumbled onto your blog, I have enjoyed it so much. I am a networker and was wondering if I could post your stuff on the Facebook page for my store. Your perspective is needed now.

Matt, I'd say they're frolicking and playing! But yeah, those ladies were HAPPY to be getting outside. You usually only see that sort of thing in calves or yearlings... The renegades are, of course, dear to my heart. But they're some crazy ass bitches sometimes. As my Dad would say, "They'll kill a man!" They pretty much will, too.

Deb, glad you got a chance to get out into the great outdoors, but yeah - ticks are definitely one not-so-great part, aren't they? Seriously. Yuck. Cows on roads are super dangerous! Glad they obstacle coursed it through and no one got hurt. Crazy cow conferences.

Edi - that is definitely one possibility, but a transiting stellium opposite a natal stellium can also have a nice balancing effect, so it just depends what the energy is doing. With Chiron, you can have an ouchy, triggered time or a validating, healing time. Again, just depends what part of the process is going on.