Saturn enters earliest Aquarius this evening (5:58 p.m. PDT) for an initial stint that lasts until July 1. Saturn will station retrograde at 1 degree Aquarius on May 10, re-entering Capricorn on July 1. It will not leave Aquarius altogether until March 7, 2023, just before Pluto enters the sign on March 23, 2023.

I've written about the major Aquarius ingresses from 2020 to 2023, including some of the more nefarious ways these ingresses and transits are being used by the power establishment. We need this knowledge, as harsh as it may be, in order to understand what we're dealing with, including how we're being manipulated and socially-engineered in ways that do not serve our best interests.

The more beneficial, sane, and humane version of the Aquarian era future involves the use of frequency for healing and protection. As the cosmic father figure, Saturn, sets up shop in Aquarius, it has some good, solid, paternal advice for us: protect yourselves from harmful frequencies while simultaneously creating good, healing frequencies.

In light of the themes, I'd like to share some information I've compiled on EMF protection and frequency healing. EMF protection combined with the creation of healing and balancing frequencies are, of course, more important now than ever as dangerous and deadly 5G "super-speed" wireless continues to be rolled out, amidst huge public opposition, all over the world. 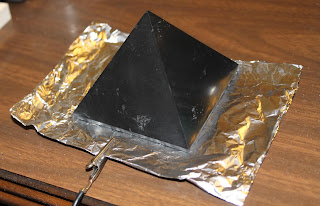 I recently purchased some EMF protection from a site called Iyashi Source. It comes in the form of a carbon-based mineral called Shieldite that absorbs electromagnetic radiation we're exposed to through things like wireless internet, cell phones, cell towers, power lines, and smart meters. I bought a pyramid-shaped block for my home and also a pendant to wear in public and when I'm working at the computer.

I also purchased an Iyashi zero point wand at the same time. From what I understand, this wand is basically concentrated crystal/frequency healing. It is said to align the body's frequencies in a way that aids and speeds healing, and it is also said to help repair some of the damage done to the body by EMFs (though, it will not protect from EMFs - that's the Shieldite).

(Yeah, I know. A magic healing wand! Woo-woo! You can also call it a pen, if you like, because it looks a lot like a pen.)

I'm not making any specific claims about these products or endorsing any of these companies. Please do your own research, and use your own intuition (as always) before parting with your hard-earned money. No product is one size fits all.

Since I'm a particularly Sensitive Sally, it took me a few days to adjust to the energy of these items. They're very potent. I found I liked the Shieldite to be a short distance from my desk, rather than right next to me. 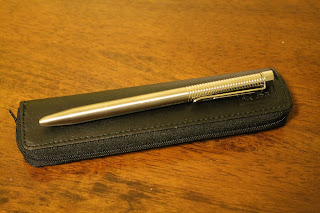 The wand (or pen) is very powerful and kicks off some detoxification symptoms in me even when I use it for only five minutes. I have the same type of reactions after an acupuncture treatment, so this is a normal response for me. So far, I have to use the wand for short durations only, but I can report that I've experienced faster healing, less fatigue, fewer aches and pains, and more energy with the combined use of these items. The energy in my home feels lighter and cleaner, and I feel lighter and more energized, as well.

There are different techniques you can use with the wand. Illustrations come with the wand, and you can also use it on the feet according to a reflexology chart. There's an instructional guide book at the website, and there are also a couple instructional videos I found helpful: Part One and Part Two
I often hook the pen onto my shirt collar and wear it around the house.

A few cautions with the wand: you can't lend it to anyone, as this has shown to decrease its effectiveness, but you can use it on yourself, on other people, and on animals. Don't put the wand near or on your computer or on any other electrical device. When carrying it, keep it in its own bag, away from cell phones and keys and such.

The price points of these items are still fairly accessible, though I'm sorry they will not be accessible to everyone. There is a similar EMF-protecting mineral called Shungite that is more affordable, mined in Karelia, Russia.

Hematite also has properties that protect from electromagnetic radiation. It has a very dense and grounding energy. I've been working with hematite for over 12 years now. It's a favourite - not just for its properties but also for its somewhat badass/punk rock appearance! I have a few hematite items for sale at the Etsy shop.

Pyrite is another protective (and quite hardcore!) mineral with which I have personal experience.

Black tourmaline is regularly mentioned for its EMF protection properties. There are many other minerals that help with EMF protection and shielding, and most of them will be quite affordable. The larger the piece of mineral, the more protection it will offer, but even small pieces will offer some protection. This is a good minerals compilation guide written by Laura Bruder at a site called originstones.com.

The Shieldite mineral is quite fragile. Don't drop it, or it will break, though broken Sheildite will still work. The Shieldite also has to be grounded to discharge the EMFs it has absorbed. Smaller pieces like pendants and small stones must be grounded once every 24 hours for 15 minutes. Medium and larger pieces have to be grounded every few days for 20 to 25 minutes.

There is a guide on the different options for grounding Shieldite at the website.

Shieldite can be grounded by placing it on dirt or by burying it in dirt directly on the ground. The Canadian weather makes this a bit tricky during certain months, and unfortunately, many urban areas don't have patches of dirt readily available.

One handy piece of information I gathered is that if you have copper pipes under your kitchen sink, Shieldite can be grounded by being placed on your metal faucet. I've even started grounding my crystals like this. They seem to produce a much lighter and cleaner energy after being grounded and purged in this way.

Regardless of these protections, a prime course of action is to raise awareness about the dangers of 5G to the point that public, grassroots pressure will stop and reverse its rollout. A situation where we have to be continually shielding ourselves from dangerous EMFs, producing counter-acting frequencies to stay healthy, is far from an ideal situation in this new era.

I haven't used the products below and can't give a personal experience with them, but feel free to peruse:

5GBioShield - plugs into a USB port

Schumann Resonance - 7.83 hz, the frequency of Earth and of the human body


From March 17, 2020: "New Moon in Aries at Apogee Conjunct Chiron: Resisting "Medical" Martial Law, the Surreptitious 5G Roll-out, and the Expansion of Authoritarian Control in Our Daily Lives"

A massive compilation of recent scientific studies on the health damage caused by EMFs:

"There are more than 1,000 scientific studies conducted by independent researchers from around the world concerning the biological effects of RF radiation. Here we present some of the most recent."

again..thank you SO MUCH for your awareness <3 you so totally rock !!

Ahh, thank-you! I appreciate your comments. :-)

Why 5G Cell Towers Are More Dangerous - Get the Facts!

First, 5G emits “ultra high frequencies”. The higher the frequency, the shorter the length of each wave. This means more waves hit our bodies in the same amount of time. Previous cellular generations emitted from 1 to 6 GHz frequencies. 5G cell towers may emit frequencies as high as 300 GHz.

Second, 5G technology requires “ultra high intensity”. Since the shorter length millimeter waves (MMV) used in 5G do not travel as far (and get obstructed easier), with our current number of cell towers the cell signal will not be reliable. To compensate 5G cell towers will have to emit the lower 3G & 4G waves as well, and many more “mini cell towers” will have to be installed. It is estimated that they will need a mini cell tower every 2 to 8 houses. All of this combined will greatly increase our RF Radiation exposure."

My uncle reports that he has not had heart palpitations since he got his Iyashi wand. This is great news!